The Cleveland Browns showed their commitment to running back Kareem Hunt on Tuesday, signing the 2017 rushing leader to a lucrative two-year extension.

The extension is reportedly worth $13.25 million, including $8.5 million guaranteed — not bad for Hunt, especially considering his career was at a crossroads last offseason. But the Browns took a chance on Hunt despite his off-field troubles and it has proven to be a great partnership for both sides.

Hunt, who is an Ohio native, shared his reaction on Instagram following the news of the extension going public.

“Cleveland has always been home to me, and putting on the Orange and Brown has always been THE dream growing up,” Hunt said in a statement sent to cleveland.com and posted on Instagram. “Being able to make it official, and play my heart out for the city I love for the next few years is a blessing.

“Of course, a BIG thank you to the entire DAWG POUND for welcoming me back home. I promise to continue to push and work hard to bring a championship here for you all, representing the best team in the NFL, and make a lasting impact in the community and on the field.”

While Hunt’s talent has not been questioned, his decision making off the field has been. While the Cleveland-native has been mostly a model citizen since signing with the Browns, he had a slip-up during the offseason where he was pulled over for speeding and it was found he had both marijuana and open alcohol containers in his vehicle.

Video emerged of the stop that didn’t paint Hunt in the best light. In the nearly six-minute long clip, Hunt tells the officer that he was trying to catch a flight and pleads his case saying, “I’ve been through a lot” multiple times. Hunt was only issued a speeding ticket.

Browns owner Jimmy Haslam made it clear after the incident that Hunt needs to be better.

“It’s not good. Kareem knows he’s got to do better,” Haslam told reporters. “What he did was not acceptable. He’s got to do better. … We have and will continue to work closely with Kareem,” Haslam added. “But he knows our expectations are higher than what he showed a week or two ago.” 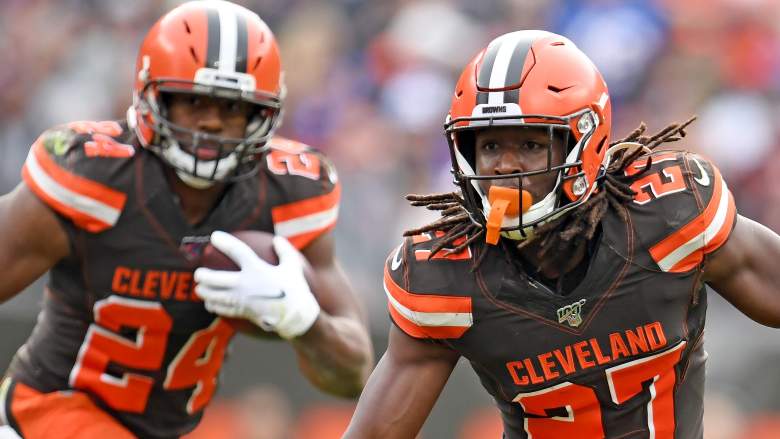 The Browns have plenty of talent in the backfield between Hunt and Nick Chubb, who just missed out on the rushing title a season ago. Chubb finished with 1,494 yards and eight touchdowns, just behind Titans RB Derrick Henry, who surged by him in the final week of the season with a 211-yard performance.

After returning to the active lineup following an eight-game suspension, Hunt finished last season with 179 rushing yards and 2 touchdowns. He also caught 37 balls out of the backfield for 285 yards, but also blocked for Chubb and showed he was willing to sacrifice for the greater good of the team.

In his first two seasons, Hunt racked up 2,151 rushing yards and 833 receiving yards. He made the Pro Bowl in 2017 as the league’s leading rusher and was on pace for another monster season before being let go by Kansas City. Hunt said this offseason he’s willing to do whatever helps the team win.

“Anytime I can get on that field and make something happen, between running the football and blocking, I’m gonna give it 110 every time,” Hunt told the Browns official site. “I’m ready to get out there and do whatever they ask.”