Getty Patrick Mahomes and his wife Brittany reacted strongly after the Oscar slap heard around the world.

In case you missed it, actor Will Smith slapped comedian and fellow actor Chris Rock on stage at the 2022 Oscars. No, this is not fake news.

After a joke involving Smith’s wife, Jada Pinkett-Smith — that many argued was of poor taste — the famous actor walked right up on stage and struck Rock across the face. The immediate reaction for most was shock and confusion, as the moment almost seemed like some really good acting — which would be fitting for an award show like the Oscars.

VIA JAPANESE TELEVISION: The uncensored exchange between Will Smith and Chris Rock pic.twitter.com/j0Z184ZyXa

Once Smith returned to his seat, it became blatantly obvious that it was not. “Keep my wife’s name out your f****** mouth,” he yelled back at the award show host.

As you can imagine, this powder keg exploded on social media, and the Kansas City Chiefs faction was represented by Kayla Nicole, Patrick Mahomes and Brittany Matthews-Mahomes among others.

Travis Kelce’s model girlfriend got the ball rolling. Nicole’s immediate tweet was ‘oh my god,’ spelled out in an elongated form.

Brittany Mahomes immediately responded: “Slapped him…. IM CONFUSED.” After catching wind of the situation, she offered an opinion on the situation.

“You. Don’t. Slap. Someone,” she tweeted one minute later at 10:31 p.m. Nicole continued on: “THESE CELEBS ARE SHOOOOOOK. Look at their faces. Lmaooooooo it just got ghetto af on the biggest night in Hollywood. Ahahahhahahahahhahah.”

THESE CELEBS ARE SHOOOOOOK. Look at their faces. Lmaooooooo it just got ghetto af on the biggest night in Hollywood. Ahahahhahahahahhahah

Patrick Mahomes responded as well but has since deleted his tweets. The screenshots are below. 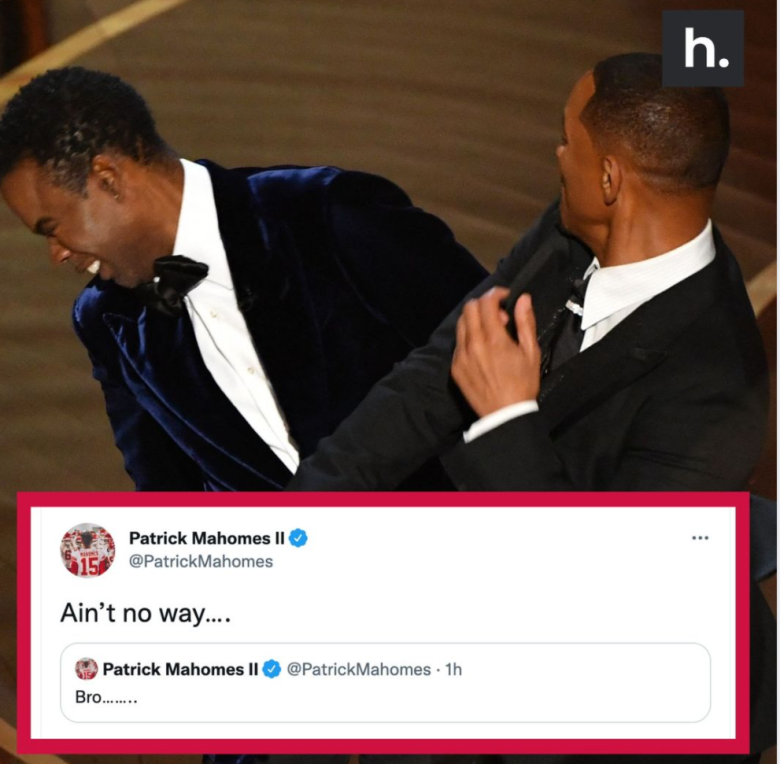 This topic has been fiercely debated on social media all night long, as well as this morning. Did Rock cross the line? Should Smith have hit him without warning? Will Rock press charges?

None of that is for us to say, but Nicole and many others did shift their initial opinion after learning more about the very public conflict.

Okaaaayyy medical conditions should be off limits. Not sure if this was common knowledge https://t.co/WsREJIeDvY

“Okaaaayyy medical conditions should be off limits. Not sure if this was common knowledge,” she wrote after a fan informed her that Pinkett-Smith suffers from alopecia, which causes rapid hair loss — the subject of Rock’s controversial punchline.

Later, Nicole retweeted a “point” from Vanessa La Rue Veasley. It read: “Chris made a whole documentary to supposedly celebrate Black hair culture and fight against its discrimination, but couldn’t resist joking about a Black woman’s hair (resulting from a medical condition) in a room full of her peers on national television. He deserved it.”

On the flip side, Smith did apologize to the academy during his acceptance speech after speaking with respected actor Denzel Washington, among others.

Will Smith’s Oscar acceptance speech about protecting people and loving people is worth the listen. pic.twitter.com/V9JAGknctQ

At the end of his speech, he concluded: “I want to apologize to the academy. I want to apologize to all my fellow nominees. … Art imitates life; I look like the crazy father. Just like they said about Richard Williams. But love will make you do crazy things. … Thank you for this moment. And thank you on behalf of Richard and the entire Williams family. Thank you. I hope the academy invites me back.”