Getty Paul George and the Clippers have a tough road ahead.

Between free agency, trades, Summer League and, of course, the season itself, the NBA calendar has become a year-long endeavor. There are lulls, though, and now is one of them. Clippers’ training camp is still five weeks off and most headline-grabbing offseason moves have already been made. (Also, the NFL.)

But there are still a few noteworthy tidbits of NBA info to process, the most recent being the full 2021-22 schedule, which the league released last Friday.

So in lieu of speculating on the team’s remaining moves or wondering what Kawhi Leonard thinks about his recovery from offseason knee surgery (and surely staying far far away from discussing a recent players-only interview in which two superstars tried to convince each other that a verbal altercation following a Clippers game was worthy of fracturing a burgeoning dynasty) let’s look at a few segments of the Clippers upcoming season.

(Spoiler Alert: It’s a rough schedule. As pointed out by Clip & Roll podcast host Justin Russo, the Clippers have the most 5-games-in-7-nights situations in the league. L.A. has five, while no other team has more than three.)

The Clippers open their season on October 21, on the road against Golden State in a nationally televised game, the first of 27 for L.A. this year. It’s just the fifth time in franchise history the Clippers will kick things off against the Warriors, and the first time in three seasons they will not do so against the Lakers.

The Warriors play 41 nationally-televised games this season (second only the to Lakers’ 42) undoubtedly due to the popularity of Steph Curry, last season’s NBA scoring champ, as well as the eventual and long-awaited return of 2-time All-NBA shooting guard Klay Thompson. But there’s also significant buzz around 18-year-old power forward Jonathan Kuminga, this year’s 7th overall draft pick who at times looked like a man amongst boys during Summer League.

Two days after the Warriors, on October 23, the Clippers play their home opener against Memphis, the team to which they traded Patrick Beverley, Rajon Rondo and Daniel Oturu for Eric Bledsoe on August 16. But Clipper Nation should not expect much of a reunion that night. Beverley has since been traded to Minnesota, and there’s a good chance Rondo and/or Oturu will be dealt elsewhere beforehand and/or not play in the game.

But Beverley, who was a Clipper for four seasons, will nevertheless get two early opportunities to make L.A. regret trading him. The Timberwolves come to town for consecutive games on November 3 and 5.

Though the Clippers will not be playing on Christmas this year, the end of December looks to be a particularly Grinch-like stretch of games.

On December 26 they host the Denver Nuggets, last season’s 3-seed out of the West, and the very next night they square off against Brooklyn. Obviously, it’s never advantageous to go against the title favorites in the second game of a tough back-to-back, but that could be especially true in this instance. The Nets play the Lakers at Staples Center on Christmas Day and won’t even need to change hotel rooms (let alone get on a plane) before their matchup with the Clippers two days later. Of 14 total back-to-backs, it’ll be L.A.’s first against two big-time contenders and could be a good gauge of a Clippers’ team that went 11-2 last season in the second half of back-to-backs. 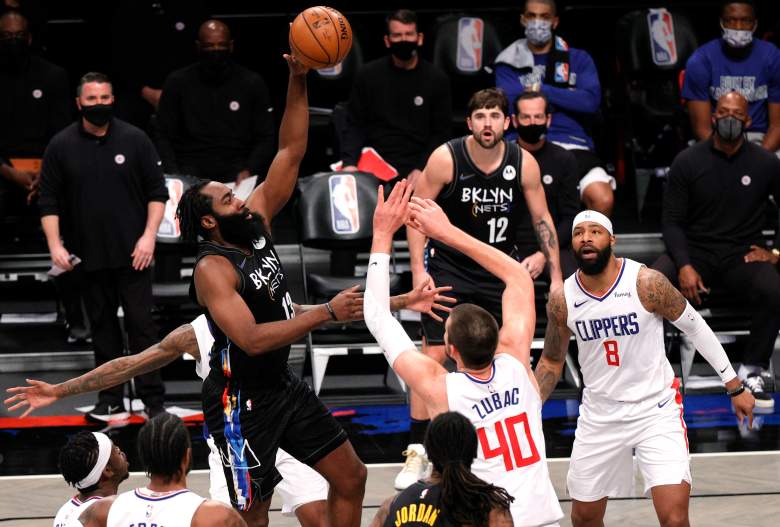 After the Nets game, the Clippers will hop a cross-country flight for the Northeast where they will first face the Celtics on December 29, the Raptors on New Year’s Eve and the Nets on New Year’s Day. It’s safe to say the Clippers would be well-advised to go easy on the champagne while leaving Toronto.

There’s little rest for the weary, however. Beginning January 13, of the 19 remaining games before All-Star Weekend, the Clippers will be on the road for 14, including stops in Denver, Philadelphia, New York and Miami. And of their five home games during that 19-game stretch, they play the Lakers and Bucks within a 48-hour span. Mercifully, Milwaukee will be on the second half of a back-to-back for the February 6 matchup, having faced Portland the night prior.

The next toughest run of games for the Clippers, at least on paper, comes as the season heads down the backstretch. Beginning March 18, they face the Jazz in Utah, the Nuggets in Denver, and then Philadelphia and Utah at home. But the fun doesn’t end there. The next two games are on the road against Chicago and Milwaukee. As defending champs, the Bucks are obviously a known menace. But the Bulls, who added Lonzo Ball, DeMar DeRozan and Alex Caruso this summer to go along with Zach Lavine and Nikola Vucevic, might be far from a cakewalk at that point in the season.

Chicago Bulls were 8th in the NBA last season in Assists Per Game.

Not totally unrealistic that the Bulls lead the NBA in Assists Per Game this season among all other NBA teams. pic.twitter.com/Livq67izWB

The last two games of the regular season are at home against Sacramento and Oklahoma City, the former looking to make the playoffs for the first time since 2006 and the latter in full rebuild mode. Last season, head coach Ty Lue was accused of tanking the last two games of the regular season, losses to Houston and OKC, to avoid the Lakers in the playoffs. Lue insisted vehemently that his decision had everything to do with rest, not tanking, but regardless, the Clippers may have no such luxury this year.

With Leonard expected to miss an indefinite amount of time, the Clippers could be in a dogfight just to avoid the Play-In Tournament. Winning those final two games, therefore, could be vital to bettering their playoff seed.

Not to mention, in the event Leonard does return in time for the playoffs, those games against Sacramento and OKC could be important irrespective of the seeding implications. Lue will surely want to get Leonard and the other guys as much playing time together as possible, and since it’s hard to imagine Leonard returning cold at the start of the playoffs, those games could be crucial real-time warmups before the regular postseason kicks off April 16.

Discover more from Heavy on Clippers↓

Loading more stories
wpDiscuz
0
0
Would love your thoughts, please comment.x
()
x
| Reply
The Clips are already staring down the barrel of a season without Kawhi. And the recently released NBA schedule does them no favors.