A wide receiver in college, Chisena was moved to safety, then back to wide receiver with the Vikings — an initial sign he maybe wasn’t the right fit at either position. Although he didn’t shine in camp as a wide receiver, he was valued for his physical gifts, making the Vikings’ 53-man roster on Saturday.

“(The Vikings) came to him in the last couple of days,’’ Chisena’s agent, Joe Linta, told Chris Tomasson. “They see merit in him as a football player. He was one of the best special teams players in the country last year at Penn State, so I think he has a place on special teams and they’re trying to see what kind of versatility he can have. The guy knows how to tackle, so that won’t be that big of a transition.”

Chisena, undrafted out of Penn State,  ran an unofficial 4.32 40-yard dash, which would be the third-best time among all 2020 NFL draft picks. Standing 6-foot-3 he has all the physical tools to become a deep threat in the NFL, and for now, a special teams gunner — a similar role Adam Thielen played as a special-teamer turned Pro Bowl talent.

Chisena is the second special teams wide receiver on the Vikings roster as fifth-rounder K.J. Osborn made the roster and is poised to be the Vikings’ return man. 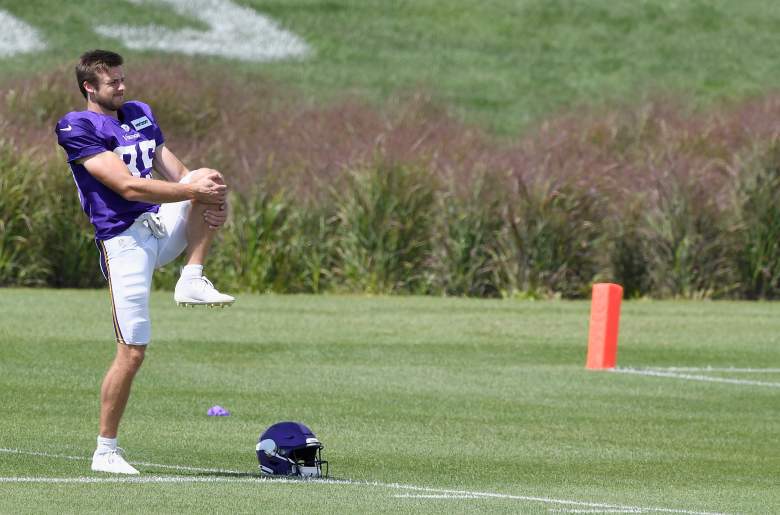 Chisena is a college track star turned football player who, while 23 years old, may have the slimmest football experience of any rostered NFL rookie. Finishing his entire football career with just three catches for 66 yards, Chisena wasn’t added off rookie free agency for his production in college, but rather, his potential.

In high school, Chisena was an all-conference wide receiver and state champion track runner, winning the 100, 200 and 4×100 relay as a senior. He walked on to Penn State’s football and track teams his freshman year and earned a track scholarship that prohibited him from playing on both teams as a sophomore.

“Ultimately, (I) made the decision to help out my family financially and try to excel at one sport instead of be average at two and decided to run track for a couple years,” Chisena told Vikings.com.

Chisena became far from average as a sprinter. He was an All-American and helped the Nittany Lions win the Big 10 championship in 2017 and break several school records in the process.

An injury his junior year in 2018 led him to reconvene with Penn State football coach James Franklin, who gave Chisena a second chance at football and a full-ride scholarship. He played in 12 games in 2019 for the Nittany Lions, who finished the season ranked ninth in the FBS.

Score a BIG touchdown: ☑️
Earn a full scholarship: ☑️
What a day for @danchisena!#PSUBlueWhite#WeAre pic.twitter.com/fGoO0oB2ff

Thielen’s road to NFL stardom was one paved in dogged perseverance and hard work. First a practice-squad player, then special teamer and part-time wide receiver, Thielen carved his footprint into the Vikings offense in his fourth season.

Chisena, who’s been running in straight lines for most of his athletic career, will have an opportunity to finally hone in on his football abilities for the first time in his career. There’s plenty of work to be done, and at age 23, he’s a bit older than the ideal project wide receiver.

“I’m going to go in and do the best that I can with the opportunities that I’m given, and do whatever I can to help this team… at receiver or on special teams,” Chisena said. “I’m just looking forward to being grateful for whatever opportunities come my way and trying to take advantage of them and letting the things I can’t control take care of themselves.

Loading more stories
wpDiscuz
0
0
Would love your thoughts, please comment.x
()
x
| Reply
The only undrafted free agent to make the Vikings roster has all the physical gifts to be an NFL star.