Vikings defensive end Danielle Hunter was placed on the injured reserve list on Wednesday and will miss at least three weeks this season.

The 25-year-old was placed on the team’s injured reserve list on Wednesday. Under 2020’s pandemic-specific rules, Hunter will miss at least the first three weeks of the season. ESPN’s Courtney Cronin reported that it is a neck injury.

#Vikings DE Danielle Hunter has been placed on IR and practice squad K Chase McLaughlin has been protected. pic.twitter.com/eNmJUAT2PP

There was mounting anticipation for the team’s first injury report, but with the designation before the deadline, the Vikings do not have to reveal his injury while on the injured reserve list. The team’s injury report was simply a technicality.

Hunter is the youngest NFL player to reach 50 career sacks and the latest Vikings edge rusher who began their career as a later-round draft pick and emerge as an NFL star.  He posted 14.5 sacks in each of the past two years, earning Pro Bowl nods in both 2018 and 2019.

Linebacker Eric Kendricks hinted that Hunter may not be ready to go which later proved to prophetic following the Vikings’ roster move.

“A guy like Danielle he brings a whole other type of game in,” Kendricks said. “It’s going to be hard to replace a guy like that but we have guys that also are hungry and want to step up, too.”

Coach Mike Zimmer said during training camp that Hunter was sidelined with a “little tweak,” but as his absence from the field continued concerns begun to brew.

The Vikings will likely move Ifeadi Odenigbo into a starting role to bookend newly acquired Pro Bowl defensive end Yannick Ngakoue, who was acquired in a trade from the Jaguars. 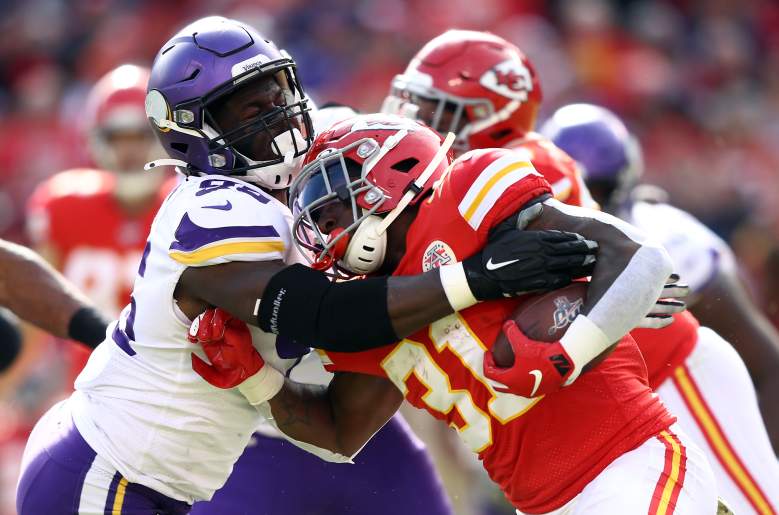 Odenigbo seemed like the next defensive end to rise to NFL stardom in a decade-long history of peak player development at the position.

Hunter, a 2015 third-round draft pick, didn’t start until his third season before becoming an NFL elite talent. Before Hunter was Everson Griffen, a fourth-round pick in 2010 that compiled 74.5 sacks in 10 seasons — good for fourth-most in franchise history.

Odenigbo, a 2018 seventh-round pick, shined in 2019. He tallied seven sacks, a forced fumble and a fumble return TD while playing 41 percent or fewer defensive snaps in 13 games last year compared to Griffen, who had eight sacks while playing 70-plus percent of snaps in 13 games. ESPN named him the top breakout candidate of the 2020 season.

When the Ngakoue trade was finalized it appeared Odenigbo’s chances of starting and realizing his breakout season were smothered. Fans speculated that the trade was to address potentially missing Hunter who sat our the entirety of full-team practices at training camp.

Now it looks like he will get a chance to start for at least the first three weeks.

Shifts On the Defensive Front

It was speculated that Odenigbo would see more reps inside at defensive tackle, but with Hunter’s designation, it looks like Odenigbo will see plenty of work on the edge.

Jalyn Holmes and Eddie Yarbrough are in line for larger roles behind Ngakoue and Odenigbo while rookie D.J. Wonnum remains buried at the bottom of the depth chart.

Shamar Stephen and Jaleel Johnson will start at defensive tackle and will be relieved by Armon Watts and Hercules Mata’afa and rookie James Lynch.

His prolonged absence from practice was cause for concern.