Getty An NFC executive believes Chicago Bears quarterback Mitch Trubisky could be a free agency target of the Vikings this offseason.

The Vikings were truly a run-first offense last Sunday when Dalvin Cook dominated the Packers to the tune of 226 total yards of offense and commanded 32 of the team’s 45 offensive touches.

Quarterback Kirk Cousins completed 11 of 14 passes for 160 yards in a game manager role that led the run-game to impose its will on a porous Packers run defense. The result was a glimpse at the effectiveness of the Vikings offense when given a chance to possess the ball.

If Cousins is relegated to a smaller role in the offense moving forward, it begs the question of whether the Vikings should continue to pay him top dollar in the final two years of his contract or cut ties and save cap space and prepare for the future of the franchise without Cousins.

One NFL executive speculated the future of Chicago Bears quarterback Mitchell Trubisky and believes Trubisky could fit in the Vikings offensive scheme.

Trubisky A Good Fit for the Vikings?

The Athletic’s Adam Jahns consulted ESPN analyst Matt Bowen who spoke with an NFL executive about Trubisky’s prospects elsewhere as the fourth-year signal-caller will reach free agency this coming offseason after the Bears declined to pick up fifth-year option.

Trubisky has had his struggles as the former No. 2 overall pick in 2017, however, the Bears failed to build a run game to complement his strengths, leading to both Bowen and the executive believing Trubisky will be given another shot, naming Titans quarterback Ryan Tannehill as an example of a quarterback who has thrived when given a second chance in a run-heavy scheme.

“There’s teams around the league that are looking for a guy, if you look at the depth charts right now, to compete for the No. 2 spot and be a guy who can come in and play football for you in a system that can help him be productive,” Bowen added.

The Browns and Vikings were named possible destinations for Trubisky as both teams run a Gary Kubiak offense that is predicated on the run and benefits from a mobile quarterback. The Browns have reached new success under first-year coach Kevin Stefanski, who was the Vikings offensive coordinator a season ago under the tutelage of his then-offensive advisor, Kubiak.

“You look at Cleveland and it’s basically the same offense that Minnesota runs,” Bowen said. “It’s a Gary Kubiak offense, a lot of movement, a lot of misdirection. You’re taking a lot of the processing out at the quarterback position, giving him again more defined reads, a lot of boot, a lot of layered reads or leveled reads, where you’re giving the quarterback a high-low read. You got one defender to read. If he plays deep, you throw it under, if he plays short, throw it deep.”

Cousins has made it a point of emphasis of using his feet more to become a better fit in the offense, but Trubisky’s athleticism is unmatched by Cousins.

“(The Vikings) want to use that run action to impact the pass rush,” Bowen added. “Now if you get hard outside zone play action, well, that defensive line is not rushing up the field anymore, they’re rushing sideways and then you’re getting that quarterback outside of the pocket now and then you have those leveled reads. You got a flat ball underneath. You got a deep crosser, you got a deep post over the top. You’re giving the quarterback options and more clear defined throwing windows as well.” 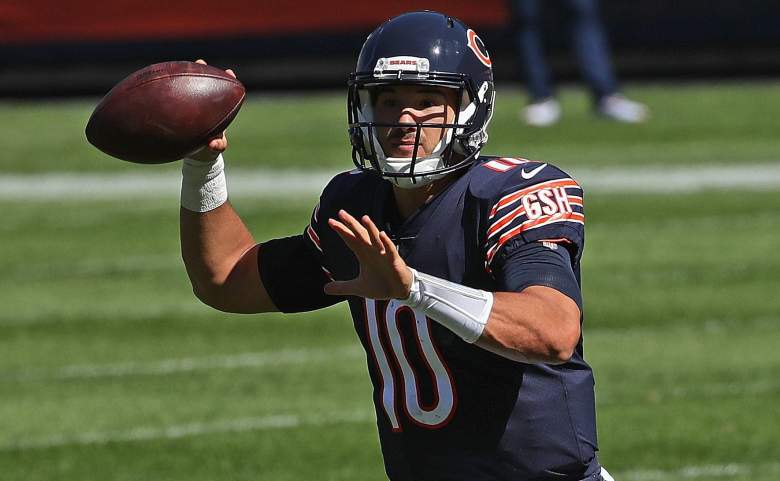 GettyTrubisky is an affordable option to help the Vikings move on from Cousins.

Trubisky, who suffered a shoulder injury last Sunday likely has not made a strong enough case to be re-signed by the Bears. He has yet to live up the mold of a franchise quarterback either.

However, Trubisky does present a better fit in the Vikings offense and is an affordable transition at the position for the Vikings who have been hamstrung by Cousins’ fully guaranteed contract.

The Vikings already owe Cousins his 2021 salary of $21 million and a $10 million signing bonus which would be a drastic decision to cut him and eat a $31 million cap hit, however, if Cousins does not improve from his league-leading 10 interceptions so far this season, he could face being cut or traded early next offseason to help the Vikings avoid owing him his 2022 salary.

Bowen’s suggestion was Trubisky restart as a backup, which could be a possibility behind Cousins. If Cousins continues to not pan out, Trubisky could help the franchise transition while they still take a quarterback in the first round of the 2021 NFL Draft.

“But again would Mitch fit in that run-heavy approach, of course, he would. He would fit in Minnesota,” Bowen said. “As a free agent, he could have an opportunity to go there.”