Courtesy of Vikings Vikings defensive end Hercules Mata'afa sent the league a message following a breakout game against the Bears.

Vikings defensive lineman Hercules Mata’afa has felt the emotional peaks and valleys that come with being a young bubble player in the NFL.

Mata’afa went from expecting to be a regular contributor this season to being cut and relegated to the Vikings practice squad in his third year as a pro. In the final year of his contract, Mata’afa’s time is ticking in the league if he does not make an impact soon, prompting the 25-year-old to take to Twitter with several cryptic tweets following his initial release.

But after a breakout performance against the Chicago Bears on Monday Night Football that included three pressures, two quarterback hits and a tackle for loss, Mata’afa again turned to social media, this time with a different tone.

Mata’afa: ‘I Belong in this League!’

Mata’afa’s tweet after the game, exclaiming “I BELONG IN THIS LEAGUE!!” was liked by over 11,000 accounts as it embodies a breakthrough moment for the young player who has been buried at the bottom of the Vikings roster for the past three seasons.

I BELONG IN THIS LEAGUE!!

His reasoning for the tweet: “It was a big-time game, and I felt like I contributed to the team and played my role to help us win. That game was kind of part of the underdog story.”

Undrafted in 2018, Mata’afa suffered a torn ACL just a couple of weeks before Vikings training camp, but in good faith, the team kept Mata’afa in the building throughout his recovery process.

Playing minimally in six games last season, His lone highlight was a fumble recovery against the Packers. In the 2020 preseason, Mata’afa was held in high praise by defensive line coach and co-defensive coordinator Andre Patterson.

Patterson told local media to not forget about Mata’afa when discussing the Vikings’ defensive line group during training camp.

“Don’t forget Hercules Mata’afa, too,” Patterson said. “There’s great talent within the group. There’s a good mix of experience and youth. You’ve still got a good group of guys that are working to continue to progress their games.”

“We’ve got some guys that are ready to turn the corner,” Patterson added, however, Mata’afa appears to not be among that group and will likely be relegated to the practice squad.

But after five weeks into this season, Mata’afa barely touched the field, playing 18 snaps in three games as the signing of ex-Washington defensive end Jordan Brailford prompted Mata’afa to be cut.

He tweeted a clown emoji after learning of his release, a symbol of the foolishness of the situation, but soon deleted it after it gained traction on social media. Mata’afa was re-signed to the practice squad the next day and subsequently added back to the active roster after the bye week, but news of the tweet had already become viral. He has since owned the emoji and uses it as a motivational reminder of the frustration he felt.

“I feel like I was really getting my opportunity, and then when I got released, I knew how hard it was to stay in this league,” Mata’afa said. “I was frustrated with myself, so I posted that clown emoji. It’s just part of my story.” 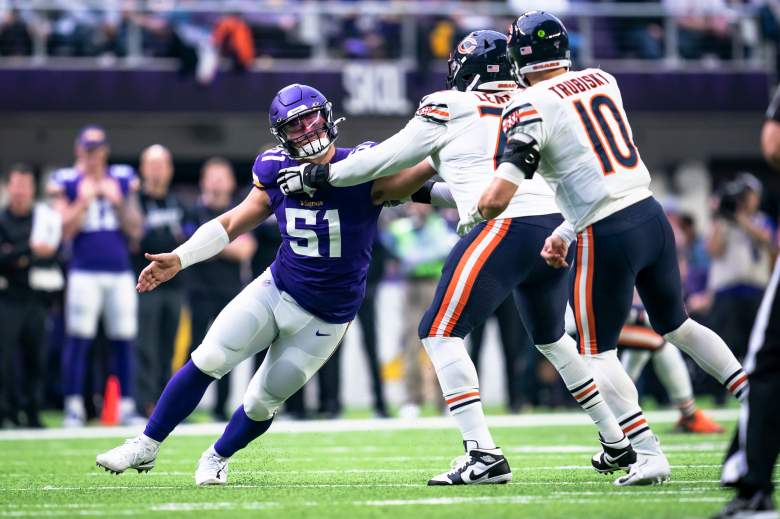 Courtesy of VikingsHercules Mata’afa switched to defensive end after being listed as a defensive tackle at the beginning of the season.

Mata’afa packed on 30 pounds this offseason to fit the Vikings’ needs at defensive tackle. Mata’afa has since moved to defensive end after the bye week and is playing some of the best football of his career.

Mata’afa was the second-highest rated Vikings defensive player by Pro Football Focus against the Bears with a 78.2 overall grade. He has at least three pressures in the Vikings’ past three games, all wins against NFC North opponents, as his emergence has coincided with improvements for the entire defense.

The combination of Mata’afa and rookie D.J. Wonnum has produced 21 pressures, four sacks and five run stops. Starters Ifeadi Odenigbo and Jalyn Holmes have produced 12 pressures, eight run stops and zero sacks as the Vikings now have competition in their pass rush, per Deshawn Vaughan of Vikings Territory.

Mata’afa is making a case to signed next offseason, when he becomes a restricted free agent, with either the Vikings or a team willing to give up a draft pick for him. Wherever he lands, Mata’afa is enjoying his recent surge.

“I’ve always been an underdog my whole career — high school, college, to now in the NFL,” he said. “My opportunity is finally coming, and I’m trying to make the best out of it.”