The Minnesota Vikings have made the move official.

First-round pick Lewis Cine was moved to the injured reserve list and is likely out for the season with a lower leg fracture.

Meanwhile, the Vikings signed a rookie safety to fill the place of Cine, who played just one defensive snap this season but was a valuable piece to a drastically improved special teams unit. 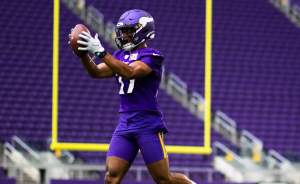 On October 5, the Vikings announced the signing of safety Mike Brown, per a team release. Brown is an undrafted rookie free agent out of Miami (Ohio) who was in Minnesota for the offseason but didn’t make the final cut.

As a redshirt senior for the RedHawks, Brown totaled 64 tackles, 9.5 tackles for loss and 1.5 sacks and a forced fumble playing primarily box safety. In 2019, he flashed some ballhawk ability, snagging three interceptions and returning two for touchdowns.

“Brown possesses outstanding size and flashed next-level ability,” Pro Football Network’s Tony Pauline wrote. “He’s a strong safety prospect who may get consideration at linebacker. But Brown must get his game back to where it was [in 2019] to have any chance of making it out of camp this summer.?

Brown had a brief stint on the Green Bay Packers practice squad before returning to the Vikings. He’s been placed on the practice squad but could see a gameday elevation to the 53-man roster if there’s a need on special teams.

If Brown is elevated, he’ll join Harrison Smith, Cam Bynum, Josh Metellus and Myles Dorn. Metellus has been a regular contributor on special teams and played every defensive snap with Smith out with a concussion in Week 3, while Dorn was elevated to the active roster that same week.

Cine, who stayed in London to undergo surgery for his leg, celebrated his 23rd birthday likely from the hospital on October 5 — but he did have a pleasant surprise.

“Vikings coach Kevin O’Connell said Lewis Cine was surprised that he was put on a Zoom call today and the team sang happy birthday,” Chris Tomasson of the Pioneer Press reported on October 5.

“It was a real special kind of moment,” O’Connell said. The hope is that Cine will return to Minnesota by the end of this week.”

Cine released a statement after a successful surgery, thanking everyone he received prayers from:

Thank you for all the prayers and well wishes over the last two days. I’m sorry I have not been able to respond to everyone that has reached out, but please know your support has been truly felt. I am incredibly grateful for the care I have received from the doctors and staff at Cleveland Clinic London. With today’s surgery behind me, I’m looking forward to returning to Minnesota, supporting my teammates and attacking this rehab so I can get back to doing what I love to do. Skol Vikings!