Getty The Vikings made a curious cut at kicker that signals who will start on Sunday.

The Vikings‘ outlook at tanking for a top-five draft pick this season went out the window after back-to-back NFC North wins against the Green Bay Packers and the Detroit Lions.

However, that hasn’t stopped the team from scouting for their future at quarterback.

Ohio State sports reporter Dan Hope reported that the Vikings and Bengals sent scouts to watch Buckeyes quarterback Justin Fields, who is projected to be the second-best quarterback of the 2021 draft class.

Fields put on a show for the NFL scouts, completing 24 of 28 passes for 314 yards and five touchdowns and ran in another TD in a 49-27 romping of Rutgers on Saturday.

Another great game from Justin Fields, another @OhioStateFB win.

Fields on a Historic Pace

Fields, a junior, has followed up his sophomore season, in which he was a Heisman Trophy finalist, with one of the greatest starts in college football history.

In three games, Fields has completed 72 of 83 passes for 908 yards, 11 touchdowns and zero interceptions. His 86.7 percent completion rate is the best three-game start to a season of any college football quarterback with at least 50 pass attempts since at least 2000.

However you want to cut it, the Kennesaw, Ga., native has been putting up video game-like numbers this season. His 11 incompletions this season matches his 11 passing touchdowns, while Fields has scored more times (13 total TDs) than he’s thrown incompletions.

The Athletic has taken a straw poll for Heisman voting and has fields as a runaway favorite for college football’s most valuable player award.

Fields Unlikely to Falls to the Vikings 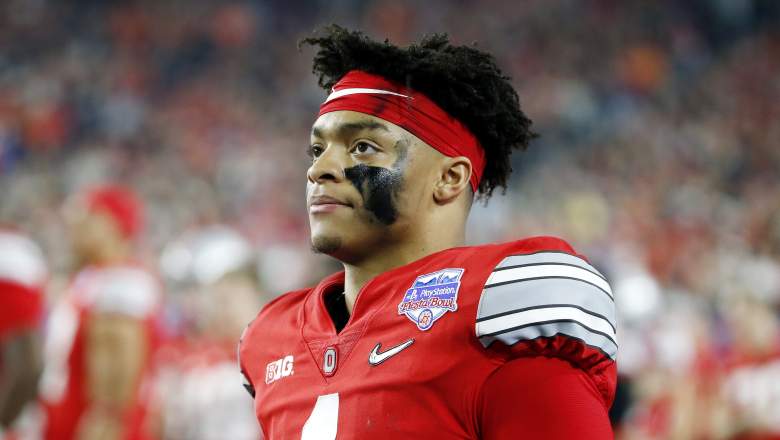 Pro Football Focus has projected the Vikings to receive the 10th overall pick in the 2021 NFL Draft. While Clemson quarterback Trevor Lawrence remains the favorite for the No. 1 overall pick, this year’s quarterback class has been highly regarded and sought after as many teams will be in the chase for a quarterback in the first round.

PFF has Fields going second overall to the New York Giants in their latest mock draft. BYU quarterback Zach Wilson is projected to go No. 3 overall to the Jacksonville Jaguars, while NDSU and Minnesota’s very own Trey Lance was selected by the Washington Redskins at No. 7 overall.

The Vikings selection of edge rusher Gregory Rosseau from Miami in PFF’s mock draft, which seems atypical for the Vikings who have generally developed later-round picks like fourth-rounder Everson Griffen and third-rounder Danielle Hunter into Pro Bowl players.

Florida’s Kyle Trask was the fourth and final quarterback taken in PFF’s mock draft at No. 32 overall as there seems to be a significant dropoff in value and teams’ needs after the first 10 picks.

The Vikings currently have nine picks for the 2021 draft that general manager Rick Spielman could maneuver into moving up in the draft.