Messages
biteSMS is a really popular jailbreak app that allows you to quickly reply and compose texts to your friends, but it doesn’t mesh well with the native iOS Messages app. This new jailbreak tweak, from Ma Jun, is called “Messages” and allows the be basic functions of biteSMS, like quick compose and reply. So, you can quickly reply to texts in your lock screen, without unlocking your phone. You can also easily compose a new message in any app, when you use Messages with Activator/QuickDo. The app is $3.99 and can be found in the BigBoss repo.

Auxo version 1.4
Auxo is one of the most popular jailbreak tweaks of all time, and has been updated to version 1.4. Not only does the new version fix some key bug issues, but introduced new toggles and additional settings as well. One of the coolest feature is the adjustment to tap zones on the brightness and music control sliders, writes iDownloadBlog. The new toggles include Do Not Disturb, Auto Lock, and a direct shortcut to the Settings app. The update is free, but if you haven’t purchased Auxo, it’s only $1.99 on Cydia.

Clear the Air
If you’re an aesthetic knit-picker like me, then you’ll love this jailbreak tweak. Clear the Air allows you to adjust the transparency of the Spotlight search features in iOS. Transparancy is adjusted using a sliding scale and buttons to toggle both the feature and the feature’s opacity. Clear the Air is absolutely free, and is available on Cydia’s BigBoss rep.

Pluck
Pluck is a newly released tweak that has a simple, yet effective function. Pluck allows users to easily choose a new song without unlocking your iPhone. A little Pluck icon shows up next to the volume slider when you’re listening to music on a locked iDevice. Click on that, and a list of songs show up, allow you to “pluck” a song to be played. 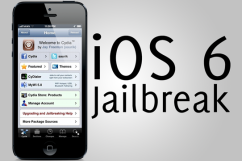 Evad3r Hacker pod2g Says There Won’t be an iOS 6.1.3 Jailbreak

TouchPal
TouchPal is a new jailbreak tweak inspired by the popular Android app Swype, that allows users to type by swiping their fingers across a keyboard instead of tapping. TouchPal is also a real App Store app that can be downloaded by all iOS users, not just users with jailbroken iOS devices. The only problem is that TouchPal only works as a standalone app, meaning you can write stuff within the app, but the feature won’t work for other apps. TouchPal for jailbroken devices allows users utilize the feature and incorporate it into normal apps like Notes, Mail, Safari, etc.