Apple is rumored to be unveiling OS X Mavericks along with two new iPads on October 22nd at 10:00am PST. Here are five fast facts you need to know.

1. Features Will Include Several Power Saving Capabilities Like App Nap

OS X Mavericks was unveiled at WWDC 2013 in which Apple surprised everyone by claiming they would deviate from the cat names. Mavericks will be the tenth version of OS X for Macs. It will contains a series of refined features such as new power preservation abilities. The most notable aspect of the battery saving abilities will be App Nap. This task is pretty self-explanatory since it enables energy saving by cutting down power used by inactive apps running in the background.

2. Multiple Displays And Finder Enhancements Round Out The Rest of The Package

Apple has emphasized that they increased production abilities for OS X Mavericks. (Apple)

The WWDC 2013 demo done by Apple exec Craig Federighi was very impressive back in June. The other elements of Mavericks that were highlighted involved a few enhancements for finders and multi-tasking. Finder tabs are perfect for organization by allowing for consolidation of tabs in window panes along with tags to find anything that could be buried under the clutter. Multiple displays play another essential role in this re-design. Each display gets its own menu bar with the dock readily available. The streamlining of the software has made this program pretty appealing for Mac users.

3. The Gold Master Was Seeded To Developers Two Weeks Ago

Macrumors reported that Apple had provided the final build of Mavericks to its large community of developers a few weeks ago. If true, the developers are working on removing any bugs or glitches since the final version may be ready for release soon. The aftermath of WWDC was all about iOS 7 and the rumors revolving around the iPhones so Mavericks may be making its triumphant entrance next week along the new iPads.

If Apple follows the same pattern as iOS 7, Mavericks could make its way to Macs within a week after this event in San Francisco. Also, the big press conference could involve the 2013 Macbook Pro that was previewed this summer too. These products could launched in tandem but expect to get your hands on Mavericks pretty quickly if it is discussed next tuesday.

5. OS X Mavericks Is A Step In The Right Direction

Apple execs Craig Federighi and/or Phil Schiller will be with Tim Cook to present the final build of Mavericks if unveiled next week. (Getty)

Under Tim Cooks rule, the empire that Steve Jobs built has been on shaky ground. The company’s future in innovation has been questionable but Cook has tried several new things to continue to bolster Apple. Leaving behind some of Job’s legacy has lead to the creation of two new iPhones as well as two rumored iPads. Mavericks marks a new generation for the line of Mac computers and the OS X will offer an incredible array of powerful features. We shall see what the final version looks like if announced October 22nd. 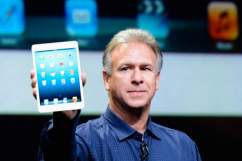