This 10.1-inch tablet boasts a Full HD display and a battery that can reach an 80% charge in just one hour. But should you buy one? Let these reviews help you make the call!

1. The Guardian: ‘Nice Hardware, Shame About the Software’

The Guardian‘s Samuel Gibbs ran his review of the Lumia 2520 with the headline “Nice Hardware, Shame About the Software.” While he praised the tablet’s excellent battery life, sturdy form factor, and vivid display, he was less than complimentary about the limitations of Windows RT 8.1.

“The biggest disadvantage of Windows RT – and it’s a doozy – is that it cannot run full Windows applications. That means no Adobe Photoshop, no web browser other than Internet Explorer, no music software like iTunes, no syncing cloud-storage services such as Dropbox.

Windows RT instead relies on applications downloaded from the Windows Store. Some well-known apps, like Dropbox, have feature-limited versions available, but they often pale in comparison to their full Windows desktop experiences…

The problem comes when Windows RT doesn’t behave. During my testing I suffered crashes and lockups, some happening while the tablet was in standby. This drained the battery flat in record time without my realising it; I returned to a dead tablet.”

While praising the quality of the speakers and the delightful feel of the tablet, Seifert also noted that the tablet didn’t work as well with the optional $149.99 Power Keyboard cover deployed.

“It adds a full keyboard, trackpad, two USB 2.0 ports, and an included battery to give the tablet even more time away from an outlet. There are no pairing headaches and there’s no Bluetooth nonsense to mess with — you just snap it on and it works. It can prop the 2520 up and accommodates working on your lap a bit better than the Surface 2, but the angle is fixed and much like the original Surface, it’s a bit too upright.

The Power Keyboard also adds a significant amount of weight (the whole package weighs a hefty 2.6lbs) and thickness to the 2520, thanks in part to the battery and thanks in part to the cumbersome trifold design Nokia employs. It’s a shame what it does to the 2520’s otherwise sleek design, and I’m not sure the tradeoffs for the cover are worth it. Microsoft did an excellent job keeping the keyboard cover for the Surface slim, and I wish Nokia had done something similar with the 2520.”

TechRadar‘s Kane Fulton gave the tablet a rating of 3.5 stars out of 5. While praising the battery life, display, and built-in LTE, Fulton disliked features of the Lumia 2520 such as Windows RT, and the lack of both a full-sized USB port and a kickstand.

“Once you’ve powered up and logged in, the tablet’s Snapdragon 800 processor zips along without any discernible lag or hiccups. As with the Surface 2, its pre-installed Microsoft Office Home & Student 2013 RT apps load up on command within a few seconds, adding to the tablet’s pick-up-and-go feel…

Running the Ice Storm Unlimited benchmark gave us a test score of 16,864, which comfortably beats the Surface 2’s score of 13,151. That extra power should come in handy when playing more graphically powerful titles on the platform.”

4. Engagdget: “Not the Best for Typing”

While Engadget‘s Dana Wollman may have felt that the Lumia 2520 was “not the best for typing,” she did have nice things to say about the tablet’s “unprecedented” camera.

She praised Nokia Apps on the device, including Nokia Music and Nokia Video Director (the latter of which she said was “dead-simple to use, which is…exactly what you want on a touchscreen device.”)

In her summation, she writes:

“Considering the Lumia 2520 is Nokia’s first Windows tablet, the company produced a strong product its first time out. Because it’s so lightweight, the 2520 is easier to use in tablet mode than the Surface 2, and that stunning 665-nit display makes the experience even sweeter. Add to that long battery life, a high-quality camera and some generous pricing ($499 with LTE and 32GB of storage), and it’s pretty clear Nokia did good.

At the same time, Nokia didn’t get everything right: A cheaper, WiFi-only version would have been nice, and the polycarbonate lid, as pretty as it is, picks up scratches a bit too easily. More than any of that, my most serious complaint has to do with the typing experience: Though the optional keyboard itself is serviceable (and adds a few extra hours of battery life), it’s uncomfortable to use in the lap, making on-the-go productivity a little more difficult.”

TechnoBuffalo‘s review of the Nokia Lumia 2520 includes the video review above.

In the written portion of their review, TechnoBuffalo had a few issues with the tablet’s design, including the fact that the charging port is next to, and nearly identical to, the 3.5mm headphone jack.

One thing they loved, however, was the battery life. TechnoBuffalo writes:

“It’s really impressive that Nokia crammed an 8,000 mAh battery in it considering the device is just over 8mm thick.

We often found ourselves using the tablet during an entire work week, for about five days, on and off until the battery was dead with brightness at about 80 percent. It offered some of the best battery life of any tablet we’ve ever tested, and with a lower screen brightness we probably could have hit about seven days of life. That’s pretty stellar.” 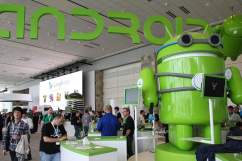