Apple has released a new, 8GB version of the iPhone 5c. Here’s everything you need to know about this new iPhone.

The video above critiques the iPhone 5c.

ReadWrite has an excellent rundown of this new iPhone 5c model. Sorry American iPhone fans…for right now, the 8GB 5c model is only available in Europe.

“The 8 GB iPhone 5C is as of right now only available through Apple’s European websites and carriers like O2, according to 9to5Mac. The price is currently listed on Apple’s United Kingdom website as £429 ($712) while O2 lists the 8GB iPhone 5C as £409 ($678) without a contract. Both of those prices are more than a consumer would pay in the United States for a 16 GB iPhone 5C, which retails for $550 off-contract with the 16 GB iPhone 5S selling for $650.”

UK tech website PC Pro is just one of many sites that have called out the new iPhone 5c 8GB for being more expensive than the competition. Moreover, that high price tag doesn’t really justify the puny storage of the device.

“The new model of the iPhone 5c comes with a paltry 8GB of storage – half that of the previous base model – yet still bears a premium price tag of £429 SIM-free, only £40 less than the 16GB model (all prices in this article are inc VAT).

At that price, it’s still £65 more expensive than better specified rivals such as the 32GB HTC One, which can be bought SIM-free for £365 from third-party resellers on Amazon.

Some have questioned whether 8GB of storage is sufficient for a modern smartphone, with games such as FIFA 14 and Call of Duty Strike Team consuming more than 1GB of storage by themselves.”

3. iPhone Is the Most-Desired Brand in Emerging Markets

While analysts are expecting iPhone 5c 8GB sales to be soft, there is some evidence that the new phone could be a success. Apple Insider reports that the iPhone is the most desired brand of smartphone in emerging markets. What remains to be seen is whether those emerging markets will embrace the cheaper iPhone 5c 8GB, or continue longing for the flashier iPhone 5s and upcoming iPhone 6.

4. Low-End Smartphones Are ‘Where the Money Is’

why an 8GB iPhone doesn't work these days: my wife's iMessage cache is currently over 10GB right now.

According to the Wall Street Journal, there is a large segment of consumers interested in low-end smartphones like the iPhone 5c. 2013 saw 800 million low-end cell phones being purchased. Some analysts say that the real money to be made in the smartphone sector comes from targeting these low-end customers.

“Nokia, for one, agrees.

‘The fastest growth really is in the affordable smartphone space,’ said Timo Toikkanen, the company’s head of mobile phones. ‘Something that’s not fully appreciated in the Western world is that a couple of bucks makes a huge difference in developing markets.’

Nokia now has some limited-capability, Internet-enabled phones that cost as little as $40.”

5. iPhone 5c Sales Have Been Soft

The video above outlines Apple’s plans to cut back on 5c production.

Mashable recently reported that Apple has intentionally slowed down production of the iPhone 5c. There are rumors that the 5s is outselling the 5c 2-to-1. It remains to be seen whether adding an 8GB version of the iPhone 5c will do anything to increase sales. 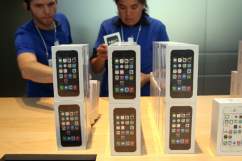