Above, you can see Elon Musk alongside a SpaceX Dragon capsule.

Elon Musk and his SpaceX program are in the news. A SpaceX rocket has been cleared by NASA for a launch on April 14. Here’s what you need to know about SpaceX.

UPDATE: SpaceX has postponed the launch scheduled for April 14 to a later date. You can watch a livestream of the rescheduled launch here.

Today’s launch is scrubbed due to a Helium leak on Falcon 9. Fix will be implemented by next opp on 4/18. Updates @ http://t.co/NHREgPdLxw

1. SpaceX Is Over a Decade Old

Founded by Elon Musk in 2002, SpaceX is a space transport company headquartered in California. The company has a number of goals, including reducing the cost of space travel and eventually putting a colony on Mars. Their creations include the Dragon and Falcon space vehicles.

Falcon 9 and #Dragon have gone vertical in advance of today’s launch to the ISS! Liftoff @ 4:58pm ET. pic.twitter.com/rwQFCx6hLn

SpaceX’s April 14 mission to the ISS will consist of a Falcon 9 rocket and Dragon cargo ship. The mission will launch from Cape Canaveral Air Force Station at 4:58 p.m. EDT. The cargo will consist of various parts and supplies for the astronauts. The launch can be viewed here.

This is not Dragon’s first flight to the ISS. Dragon was first sent to the International Space Station in May 2012.

3. SpaceX Launch Almost Didn’t Happen Because of a Glitch

#SpaceX #NASASocial attendees are given the opportunity to view the rocket on Pad 40 at SLC-40 at CCAFS. pic.twitter.com/YGVrZhlrXn

CBS News reports that a faulty computer almost caused the delay of the April 14 SpaceX launch.

“Launch originally was planned for last month, but the flight was delayed, first by concern about contamination in an unpressurized section of the cargo ship and later by a short circuit that damaged a critical Air Force tracking radar.

The contamination issue was dismissed earlier and with the radar system back in operation, SpaceX was in the final stages of launch preparations when a multiplexer-demultiplexer, or MDM, failed aboard the station Friday.”

#Dragon got a few upgrades since last trip to station. More at http://t.co/NHREgPdLxw. pic.twitter.com/qnOrZhQUFm

As part of the April 14 mission, SpaceX plans to test their “reusable rocket.”

According to a report on Space.com, SpaceX’s Vice President of Mission Assurance Hans Koenigsmann pegs the odds of successfully executing this maneuver at 30 or 40 percent.

Space.com explains the SpaceX reusable rocket concept as “launch[ing] a rocket with landing legs into orbit today, then try[ing] to bring part of it back and park it in the ocean.”

Dragon is an unmanned capsule.

Fox News reports that some of the SpaceX Dragon mission’s cargo may seem “weird.” They elaborate:

“Among the 5,000 lbs. of cargo riding aboard Dragon are a set of legs for a robotic astronaut, an experimental mini-farm for space vegetables…microbes collected by cheerleaders…[and] a satellite with the brain of a smartphone.” 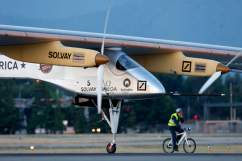