Google showed off some Android Wear watches during the Google I/O Keynote. Opinions are divided about these new watches. Some tech insiders are raving over them, while others are urging smartwatch fans to hold out for the iWatch, if and when it actually launches. Should you buy one of the Android Wear watches available now, or hold out for Apple’s elusive “iWatch”? Here’s what you should take into consideration.

Check out a concept video for the iWatch in the video above.

Apple has a long history of doing certain types of products better than any other tech company. For example, Apple’s iPod knocked Microsoft’s Zune right out of the marketplace, and Apple continues to dominate the tablet marketplace with their iPad.

Business Insider has an interesting piece that predicts Apple’s dominance in the wearables sphere. The piece notes that Microsoft announced the HP Slate before Apple announced the first iPad…but the iPad ended up dominating the market even though Microsoft technically got there first. BI writes:

“We didn’t see anything from Android Wear that makes us want to buy a smartwatch. Google ordered a pizza from a smartwatch on stage. They called a car using the watch. They showed an integration with Pinterest…

And so, once again, the runway is cleared for Apple. In a few months, Tim Cook can take the stage and show us how a smartwatch should really work with the iWatch.

Our guess is that instead of trying to make it a baby smartphone, Apple comes up with a novel, unique use for the watch…Apple has proven through the years that it can figure out what people want and what people need, even if people don’t realize it.”

For people who are either buying their first smartwatch or looking for a replacement smartwatch, there’s something to be said for the near-instant gratification of buying an Android Wear smartwatch. You can buy one right now from the Google Play store today, and have it in hand by early July.

In contrast, the iWatch isn’t expected until October, or perhaps even later in the year. MacRumors notes that the first rumors of an iWatch surfaced way back in 2012, which seems like an eternity in tech time. For people who are tired of waiting for the iWatch, the ease of buying an Android Wear-enabled watch is really appealing.

It’s hard to compare the features of the iWatch to any Android Wear watch, since so much is still unknown about the iWatch at this point. Rumored features on the iWatch run the gamut from UV sensors to cardio monitors. It’s also expected to play nice with HealthKit.

Confirmed features of Android Wear include note-taking abilities, notifications, reminders based on location, music controls, and even the ability to use your watch as a boarding pass at the airport.

There’s no firm release date for the iWatch, but that hasn’t stopped some tech insiders from speculating on the price. The iWatch could cost you as much as $400, based on a report from 9to5Mac. It’s possible that there will be a range of iWatches or iWearables, which will have a variety of price points.

In contrast, Android Wear-enabled smartwatches run for about half of the iWatch’s highest estimated price. For example, you can buy a Samsung Gear Live for about $200, or grab the LG G Watch for about $220.

The video above from CNET rounds up a bunch of interesting iWatch rumors.

Ultimately, for most people, the choice between an Android Wear watch or an iWatch comes down to your personal tech ecosystem. If you already own an iPhone, chances are you’ll wait for an iWatch. If you own an Android phone, then owning an Android Wear-enabled watch like the LG G Watch or Moto 360 just makes sense.

However, the choice may not be as cut and dry as it initially appears. What if you have an iPhone for personal use, but an Android phone provided to you by your workplace? ZDNet notes that Android Wear has a ton of possibilities for enterprise, from replacing employee ID cards to sending out meeting requests and reminders. 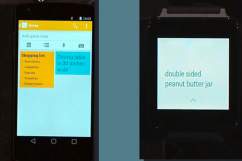