As you would assume from the name, Android Wear is a wearable-specific form of Android. It syncs with your Android-powered smartphone and offers notifications, weather, messaging, reminders, and more. Upcoming Android Wear devices include Moto 360, LG G Watch, Samsung Gear Live, and upcoming devices from HTC, ASUS, and Fossil.

2. Android Wear Has Some Bugs

I can't wait for an Android Wear pocket watch. Wait. That's what my phone is.

In the Keynote at Google I/O, there was one big issue with Android Wear. During the demo of Android Wear on an LG G Watch, the Notes functionality failed after two repeated attempts. It’s not clear what went wrong, but one assumes Google (or perhaps LG) will have it sorted soon.

CNET notes that the Android Wear platform will support watches with both square and circular watch faces.

According to the Android Wear portion of the Google I/O Keynote, all Android Wear devices featured at the event will have water-resistant features. It is not clear whether this means an IP67 rating (as on a Samsung Galaxy S5), or a different level of protection against the elements.

Continuing in the pizza inclusion in #IO14 demos, Android Wear users can order food from @EAT24 from their wrists. pic.twitter.com/7NrEDjoGou

Android Wear smartwatches and other devices will play nice with Google’s own apps (such as Hangouts), as well as third-party apps. The wearable portion of any supported app is automatically installed and updated on the watch. Just download the full app on your phone or tablet, and the Wear-enabled device takes care of the rest. 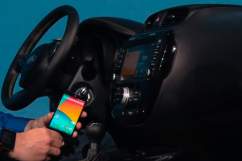