The dating app Tinder is in the news after Tinder’s former VP of Marketing Whitney Wolfe lodged a sexual harassment complaint against some of her former male co-workers, including Tinder co-founder Justin Mateen. Here’s what you need to know about this tech scandal.

The Wall Street Journal writes that Whitney Wolfe, one of Tinder’s early hires and the app’s former VP of Marketing, has filed a complaint against both Tinder and Tinder’s parent company IAC. WSJ recounts the circumstances that led to Wolfe’s complaint:

“Justin Mateen, repeatedly called [Wolfe] a ‘whore’ and says he removed her ‘co-founder’ title because she was a ‘young female.’ The suit goes on to describe a ‘frat-like’ atmosphere, where it was common for male executives to use racist and sexist terms. The suit also accuses Tinder’s CEO, Sean Rad, of using such language and ignoring her complaints.”

2. Tinder’s Justin Mateen Has Been Suspended

According to Buzzfeed, Tinder’s co-founder Justin Mateen has been suspended in the wake of these sexual harassment allegations.

USA Today quotes a statement from IAC, one of Tinder’s parent companies:

“Immediately upon receipt of the allegations contained in Ms. Wolfe’s complaint, Mr. Mateen was suspended pending an ongoing internal investigation. Through that process, it has become clear that Mr. Mateen sent private messages to Ms. Wolfe containing inappropriate content. We unequivocally condemn these messages, but believe that Ms. Wolfe’s allegations with respect to Tinder and its management are unfounded.”

3. Tinder Sexual Harassment Suit Part of a Disturbing Trend in the Tech Sector

This whole @tinder debacle is a very bad example of how Silicon Valley seems to work http://t.co/EiXSti0XHU

The complaint filed against the leadership at Tinder is part of a disturbing trend in the tech realm. Justin Mateen is far from the only tech leader in recent weeks to be at the center of a scandal.

The Detroit Free Press adds that even Snapchat’s CEO has been in hot water:

“Last month, Snapchat CEO Evan Spiegel got into hot water when explicit emails he sent while a student at Stanford University surfaced. Spiegel apologized for the emails which contained statements that were demeaning to women.”

According to the New York Daily News, Wolfe and Mateen were an item at one time. The Daily News explains:

“Wolfe was one of five who helped found and launch the Los Angeles-based app in 2012. She at one point dated Mateen, though she says he repeatedly called her a ‘slut’ and ‘whore,’ oftentimes in front of Chief Executive Officer Sean Rad.”

TechCrunch elaborates with some shocking details about their relationship:

“The suit also describes the romantic relationship that Mateen pursued with Wolfe, despite the fact that he was her direct supervisor. When things went sour between them, issues within the organization became even more difficult. After a breakup in December of last year, the suit claims, Mateen told Wolfe to stay away from other men for a period of six months.”

I'm shocked that the dudes that made Tinder turned out to be awful people. What were the odds?

According to Business Insider, Wolfe appears to have been integral in the development of Tinder. Whitney Wolfe came up with the name Tinder, and “took the idea” for the app under her wing after the company’s former app offering, Cardify, failed to find an audience. Wolfe was also responsible for promoting the app on college campuses and growing the user base. 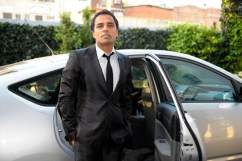