Samsung is getting ready to release the Gear Solo, a new smartwatch that could take on Apple’s iWatch. Here’s what you need to know about the latest wearable device from Samsung.

The Gear Solo, also being referred to in the press as the Gear 2 Solo, is expected to debut next month. September is shaping up to be a big month for phone and gadget releases, with Apple expected to debut the iPhone 6 shortly after a bunch of other manufacturers debut their new wearables and smartphones at IFA in Berlin. Motorola is also expected to unveil their Moto 360 smartwatch ahead of IFA.

2. Gear Solo May Work Without a Smartphone

Check out the report above to hear some criticisms of Samsung’s original Gear watch, which debuted last year.

The one major drawback that a lot of smartwatches have is the fact that they don’t do much on their own. Almost all smartwatches on the market require you to have your smartphone nearby, in order to get the most out of the device. The Gear Solo, however, is rumored to be full-featured without a smartphone nearby. SlashGear writes that “Solo” name is a reference to the watch’s ability to run without a smartphone, while CNET notes that the Gear Solo is likely to offer the ability to take phone calls on the go. 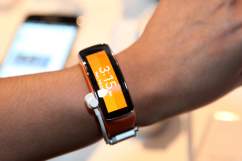 3. The Samsung Gear Solo Will Compete Against the iWatch

The video above from CNET rounds up a bunch of interesting iWatch rumors.

The launch of the Samsung Gear Solo is expected to take place just before the possible launch of Apple’s iWatch. Some tech insiders think that Apple might debut their long-awaited smartwatch at the launch event for the iPhone 6. If the iWatch does debut this fall, the Gear Solo will be a direct competitor. 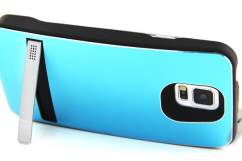 4. Samsung Already Has a Huge Selection of Smart Wearables

5. The Gear Solo Might Be Marketed Alongside the Galaxy Note 4

Get Marques Brownlee’s take on the Galaxy Note 4 in the video above.

TechRadar notes that the Gear Solo’s release date is likely to line up with the release of the Samsung Galaxy Note 4. It’s possible that Samsung might market the two devices together. Even if the Gear Solo doesn’t need a smartphone to unlock its best features, shoppers who are in the market for a new Galaxy Note might want a smartwatch accessory.