The Next Web Conference is chock full of cool startups and cool people.

The Next Web Conference has attracted several amazing startups from around the world that are trying to solve problems in our daily lives.

Here are four of the coolest startups at the event:

This app looks to help world travelers ditch services like Skype and Viber and provide free WiFi or LTE/3G calling from anywhere across the globe.

Calls and texts between YouRoam users are free, and it’s only one-cent per minute when calling a non-YouRoam number.

While users have complained for years that using Google Voice often leads to missed calls because of the random numbers on Caller ID, YouRoam calls show up on Caller ID under the user’s phone number.

Launching at the Amsterdam Arena in the coming weeks, this app is basically Seamless for the fan who doesn’t want to leave their seat at a game.

Stadiums who implement this app will give their customers the option to order concession-stand items from their seat and have it delivered to them.

No more waiting for the beer and peanuts guy. No more missing a home run because you were in line for a hot dog.

Seat Serve is going live for an Ajax match, so it’s safe to assume the app will have a thorough beta test, as Amsterdam Arena seats more than 50,000 screaming, passionate, hungry fans.

The developers have had conversations with American venues about integrating the app, and they’re hopeful the soccer fanatics in Amsterdam will help prove the app’s worth and viability in a large environment.

Keep tabs on Seat Serve and see if they’re coming to your favorite venue here.

Ever wish you could message your significant other the exact moment they got to the grocery store so they don’t forget milk again?

With Hellow! on iOS, you can do just that.

Users can set a time or location for their contacts to receive a photo message, and the free app is coming soon to Android.

For users who don’t yet have Hellow!, they’ll receive a text when someone invites them to download the app and check the message that’s awaiting them.

Being a freshman on a college campus can be tough. That’s why Penn State graduate Adam Michalski created DormChat.

The app allows students to chat — anonymously or after disclosing their identity — to other people on their campus.

The app requires a “.edu” email address to sign up and is location-based to verify users’ proximity to one another.

DormChat only works for users after at least 125 students have signed up on a campus, and there are currently 40 universities with active communities in the U.S.

Students can download DormChat for free here on iOS and here on Android. 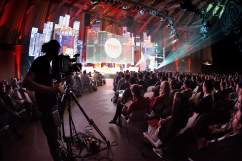