Planning to buy a new smartphone in the next couple months? There are lots of great phones on the market now, and plenty more coming in the spring. Two great options are the iPhone 6, which debuted late last year, or the upcoming Samsung Galaxy S6, which is the updated version of the S5. You could get an iPhone 6 right now, but should you wait for the Samsung Galaxy S6 instead? While details are scarce about the features and specs for the S6, there’s enough info out there so we can make an educated guess about this new phone, and compare it to what we know about the iPhone 6. Read on to see how these two phones compare.

Want more smartphone comparisons? Check out our posts on the iPhone 6 vs. Galaxy S5, Galaxy S5 vs. iPhone 5s, or the Nexus 6 vs. iPhone 6.

The iPhone 6 is, for all intents and purposes, Apple’s flagship smartphone. While the iPhone 6 Plus is bigger, it runs on the same A8 chip as the iPhone 6. The iPhone 6 supports Bluetooth 4.0, and 802.11a/b/g/n/ac Wi‑Fi. In terms of battery life, Apple states that the iPhone 6 can give you up to 11 hours of Internet browsing on Wi‑Fi, or up to 14 hours of talk time on 3G. This phone also has a TouchID fingerprint scanner, which can be used for unlocking the phone or making digital payments. It is available in 16, 64, and 128 GB models. The height is 5.44 inches and the width is 2.64 inches, with a weight of 129 grams (4.55 ounces). The screen is 4.7 inches.

The upcoming Samsung Galaxy S6’s specs are still unconfirmed. However, CNET has a great roundup of what the specs are likely to be. It is like the S6 will run on a Exynos 7420 processor, and have a screen of at least 5 inches. The iPhone 6 is made of aluminum, and it’s considered very likely that aluminum or another metal will be used on the S6.

Both the iPhone 6 and 6 Plus have the same 8-megapixel iSight camera in the rear, and the same 1.2-megapixel FaceTime camera in the front. The cameras on the Samsung Galaxy S6 are likely to be a five megapixel front-facing camera, with a rear camera between 16 and 20 megapixels. The phone is expected to have a fingerprint scanner. It is not yet clear whether the S6 will offer OIS (optical image stabilization), a feature that the iPhone 6 Plus has, but the iPhone 6 lacks.

Earlier this year, the iPhone 6 was at the center of a controversy called “Bendgate.” Some iPhone 6 owners claimed that their phone was bending when placed in their pockets. Learn more about these claims in the video above.

Apple’s Apple Pay system is supported on all iPhones with TouchID, including the iPhone 6. Apple Pay is accepted at many different stores, including major retailers like Bloomingdale’s and Panera. While Apple Pay is easy to set up, not every financial institution or shopping center accepts Apple Pay.

Not to be outdone, Samsung is also integrating their own payment system into the next Galaxy phone. It’s called LoopPay, and Gigaom is calling it the “secret weapon” inside the Galaxy S6. The LoopPay coil can be placed within a device, and will work with the existing technology at store cash registers. As Business Insider explains:

“Merchants don’t need anything special for LoopPay to work at their store — it works anywhere where a credit or debit card would work.

This is different to Apple Pay, which requires merchants to have special near-field communication terminals, vastly limiting the number of retailers that use it. Many have outright rejected the mobile payment system…LoopPay can be used at over 10 million retail locations in the US; Apple Pay can only be used at 220,000 locations.” 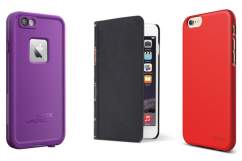 What’s the Best iPhone 6 Case for Me?

In the video above, the Wall Street Journal reviews the Samsung Galaxy Gear Fit.

For iPhone 6 owners, there are relatively few smartwatch options available. There’s the hotly anticipated Apple Watch, but that won’t be on sale until later this year, and it is expected to be quite expensive. There are third-party smartwatches from Pebble and Alcatel that will work with both iPhone and Android devices, but overall the Samsung Galaxy line of phones has more smartwatch options. The wide array of Samsung wearables that work with the Galaxy line of phones include the following: Galaxy Gear, Gear Fit, Gear 2, Gear 2 Neo, and Samsung Gear S.

In terms of fitness trackers, nearly every major fitness tracker on the market works with both iPhone and Android. You can see some of our top picks for the best smartwatches and wearables in our guide from earlier this year.

A phone is only as good as it’s case. Check out the video above to see how an Apple-made case stacks up, and decide whether you want to get a third-party case or one of Apple’s special cases. The video features both the iPhone 6 silicone case and leather case options from Apple.

Ultimately, it’s a bit too soon to say whether the iPhone 6 will be outclassed by Samsung’s Galaxy S6. That being said, the S6 is expected to beat the iPhone 6 in a couple of key areas. The S5 was waterproof, so it safe to assume the S6 will be as well. Neither the iPhone 6 or 6 Plus are waterproof. Complex reports that the S6 will also come in more color options than the iPhone 6, and the S6’s smallest base model will be 32GB, as opposed to 16GB on the iPhone 6. There are also rumors that the S6 will have built-in wireless charging capabilities. If all these rumors about the S6 pan out, this could be an iPhone killer. However, people who are already heavily invested in Apple’s ecosystem are unlikely to make the switch to Samsung.