So without further ado, here are today’s daily deals: 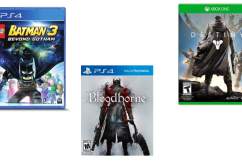 Toys R Us has a great deal on Destiny, as they’re selling the game for $20 on all consoles, including Xbox One and PS4. This is $20 lower than the MSRP, and $5 lower than we’re seeing it anywhere else. And, you can order it online for free store pickup.

The brand new Asus ZenFone 2 released in the US last week, debuting at just $199. This is a very impressive phone for the price, giving you 5.5″ IPS 1920×1080 screen, Dual SIM, 13MP rear/5MP front cameras, and 2GB of RAM. Amazon is selling the unlocked version of the phone for just $199, allowing consumers to use the phone with any GSM LTE network, including AT&T, T-Mobile, Straight Talk, MetroPCS, and more. It won’t work with Verizon or Sprint.

The number one best-selling Smart Watch, the Motorola Moto 360, is on sale for nearly $100 off the original MSRP, costing you just $149.99. The deal is only valid for the grey leather version, but if you’re okay with that — and you should be, because it looks great — head over to pick it up on Amazon right now.

If you’re big into retro gaming, you can pick up nearly every Tomb Raider game dating back to the first for under $2 each on PC when you use the coupon code SLICKD-EALS23-OFFGMG. Head over to Green Man Gaming for this great video game deal! [via SlickDeals]

Read More
4K TV, Daily Deals, Deals, Shopping
wpDiscuz
0
0
Would love your thoughts, please comment.x
()
x
| Reply
Our deals of the day include HUGE savings on a Sony 70" 4k UHD 3D TV and the best-selling Android smartwatch on the market.