Hasbro has revealed its latest line of Fortnite NERF guns.

While some of these have been released previously, the latest range makes some really cool changes.

For a start, some of the guns come with really fun llama targets that are certain to make kids smile as they’re blasting them down and flossing around the room.

The other big change, in the case of the Motorized Durrr Burger Blaster, is the introduction of weapon wrap stickers.

Weapon wraps are an equippable skin used in-game by players to decorate their guns, and it’s awesome to see Hasbro Fortnite NERF blasters getting the same treatment, albeit in the form of stickers. It makes the blasters brighter and more inviting.

So, with all that out the way, let’s take a look at all the Fortnite NERF blasters you can pick up rihgt now!

The Durr Burger Blaster is going to be the big one everyone wants. It’s based on one of the most popular Fortnite weapons, and not only that, this version of the blaster introduces weapon wraps.

Weapons wraps in Fortnite are basically just different styles for the in-game guns. What NERF has created here is a plain white and yellow blaster kids can customize with the included Durr Burger stickers.

It’s a really unique and fun way of making a NERF blaster more personal and I’m certain kids are going to love it.

This blaster also comes with 20 official NERF darts, a 10-dart clip, flip sights, and because it’s motorized, there’s no pull-back, lock and load mechanic, so kids can fire off the 10 rounds in the clip back to back. Neat! 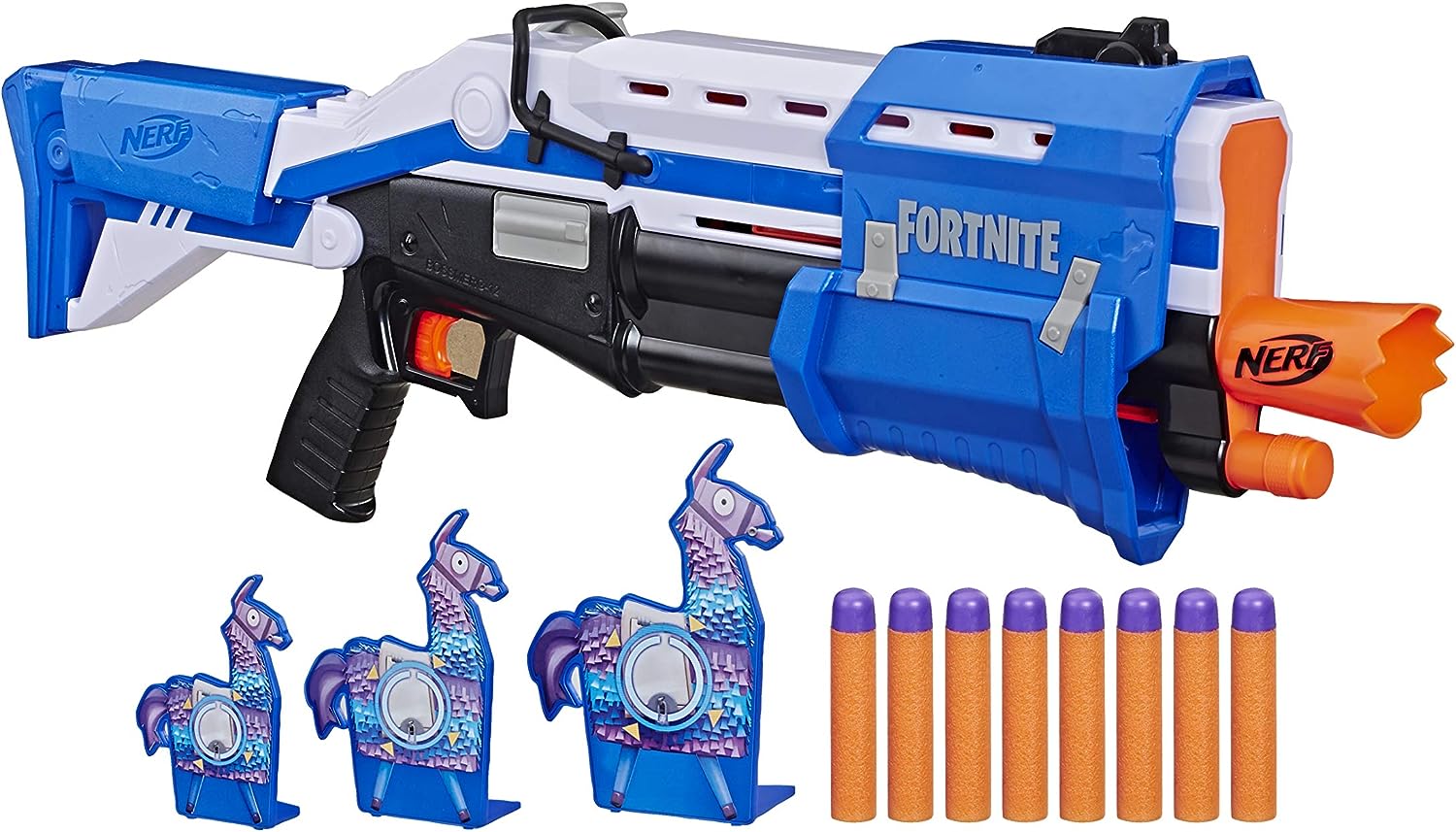 After the Durr Burger blaster, the TS-R Blaster and Llama Targets is sure to fly off the shelves.

It’s based on Fortnite’s tactical shotgun, which is a super popular weapon used by the vast majority of players.

At the risk of derailing this a bit, one of the things I love about NERF is how they turn Fortnite guns into more child-friendly blasters.

Fortnite guns are based on real-world guns, so to help differentiate between real guns and toy guns, NERF changes the colors to make them less realistic. It’s good to see toy companies thinking about this stuff rather than opting for complete realism.

So, onto the actual TS-R blaster. This pump-action blaster comes with eight official NERF darts, four of which can be stored in the blaster. But where this set really comes alive, however, is with the Llama targets – kids are sure to have tons of fun lining up those derpy llamas and blasting them down. 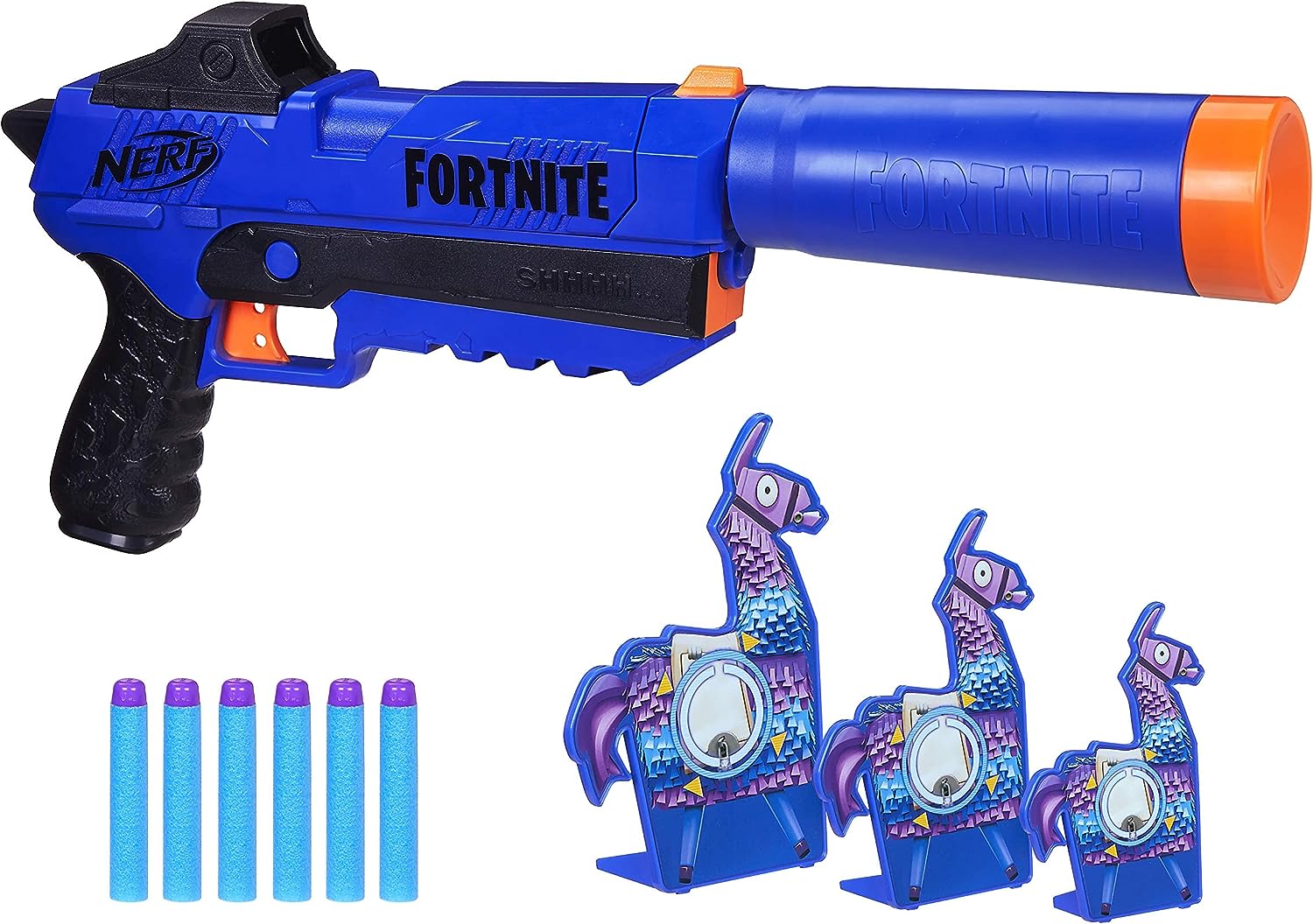 Not all NERF blasters need to be expensive. Blasters like the Fortnite Sp-R are perfect for allowance money or as stocking fillers.

This blaster is based on the Fortnite silenced pistol, which isn’t the most popular gun to use in the video game, but it sure is one of the coolest.

What’s cool here is it’s actually two Fortnite guns in one. If your child loves the standard Fortnite pistol as much as I do, you can detach the barrel to make it look like that. Don’t you just love clever ideas like that?

This blaster comes with six official NERF darts, three of which can be stored neatly in the blaster.

It also comes with three of the new Llama targets. I have so many fond memories from my childhood of setting up cans to shoot down with potato guns, so I’m certain kids are going to have a blast setting up llamas on the stairs or on shelves and blasting them in their stupid purple faces.

I should note, there is a cheaper version of this gun in yellow available for around five-to-10 bucks less, but that one doesn’t come with the llama targets and it’s yellow, which isn’t the greatest color for a blaster in the world.

Rocket launchers in Fortnite are some of the most fun kids can have. When a team charges at you, all flossing, but you’ve got a rocket launcher, all’s you needs to do is let a rocket rip and bask in the opposing team’s foolishness.

To be able to have a version of the Fortnite rocket launcher in NERF form is, as I say, really awesome.

This beast of a blaster comes with two official NERF foam rockets and features a lock-and-load mechanic as opposed to a motorized equivalent. To be honest, I think this blaster actually benefits from not being motorized. Having to lock-in your own rockets and prime it makes it feel much more authentic.

Although the foam rockets aren’t dangerous (so long as your kids aren’t doing anything they shouldn’t), it’s worth skipping this blaster for younger kids. The age recommendation on this one is 8 years and up, which sounds about right. 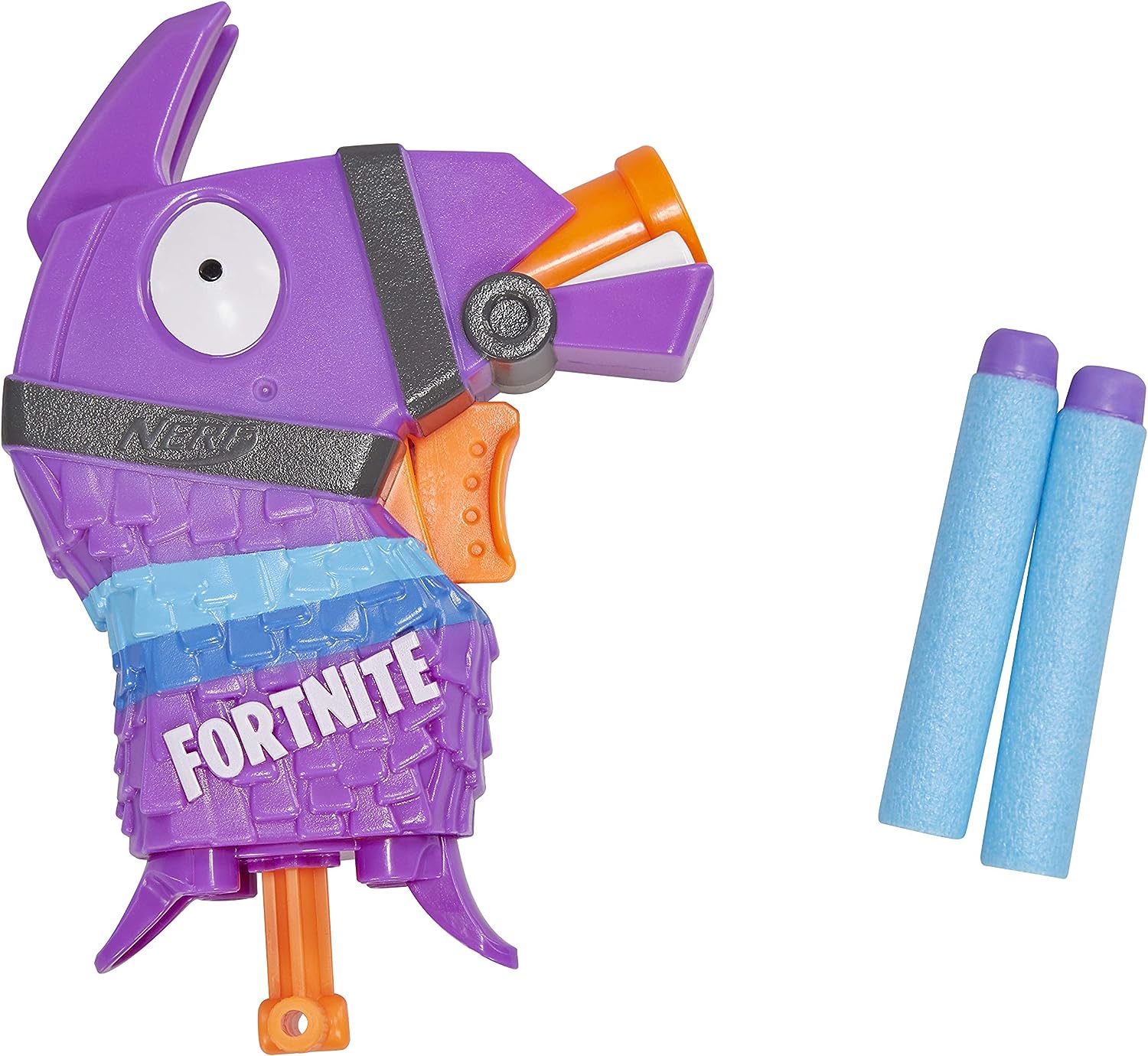 I’ve mentioned prior how not every NERF blaster needs to be expensive for it to be fun. My youngest actually bought the Llama Microshot with their allowance and they absolutely love it.

It’s a simple blaster to use – you literally just pull down the orange handle to prime it, load your dart in, then pull the trigger to jettison darts across the room.

What makes this blaster so appealing, other than the very low price, is how utterly ridiculous it looks. The Fortnite llama, a kind of unofficial mascot, is the derpiest creature you’ll ever see, and this blaster recreates the llama’s silliness effortlessly.

If you’re after allowance gifts or stocking fillers that are going to put those big smiles on faces, you won’t go wrong with this one.

Where to Buy Them Right Now

As always, Amazon is my go-to online storefront. Amazon Prime gets you next day delivery – a must for when Christmas kicks in – and if you haven’t used Prime before, you can sign up to a 30-day trial for free.

Amazon also has a killer returns policy should you change your mind or if any breaks.

Buy Them On Amazon Here.

Target currently has pre-order links for two guns, with a third, the NERF Fortnite AR-E Motorized Blaster, due to blast into stores on 10/1. Should Target add a pre-order link for the third gun we’ll be sure to update.

If Walmart is your go-to online store, you can now pick up the NERF Fortnite R-HT and other Fortnite guns from both the company’s online storefront and in-store.

wpDiscuz
0
0
Would love your thoughts, please comment.x
()
x
| Reply
Looking for the best deals on the new Fortnite NERF range? We've got all the info you need on the inside.