But reviews are already pouring in from lucky screeners who were able to preview episode one of the series, aptly titled Pilot. The summary of the episode, according to Wikipedia, is:

After the events of The Avengers, S.H.I.E.L.D. Agent Phil Coulson (Clark Gregg) assembles a small team of agents to investigate a mysterious group called the Rising Tide. In doing so, they encounter Mike Peterson (J. August Richards), an ordinary man who has acquired superhuman powers.

The episode has scored of 76 on MetaCritic, which means “generally favorable reviews.” Some of the early positive reviews include:

Paired with the endearing self-awareness and cerebral nods to pop culture Whedon brings to his best projects, it’s the perfect setup for fall’s most promising new TV show.

The most negative review came from The Washington Post, who gave a score of 67, citing:

If you haven’t been reading Marvel Comics lately… then the show can feel somewhat exclusionary and, frankly, a little too cornball and cutesy about its own geekiness.

With the general nod of at least primary approval, Marvel fans are already in full celebration mode. Reddit particularly has furnished an ample supply of followers in the new subreddit r/shield, with plot devices and future integration of favorite comic book characters dialogue taking up a majority of the forum. Some examples include:

not sure about some of these but they would be making a massive mistake not to bring scorpio and the zodiak into it as a major part. They could very easily remove the ridiculous costunes and powers and it would be completely fine -agentspymonkey 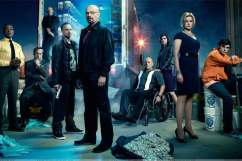 With others hoping for a seemingly impossible X-Men tie-in.

All in all, the stream of previews seems to hint at a cross between Heroes and The X-Files.