The first episode of American Horror Story: Coven has just aired called “Bitchcraft”. Here’s what you may have missed. 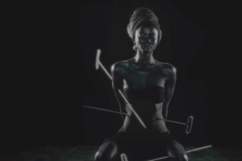 We travel back in time to a lavish house party thrown by Delphine LaLaurie. Introducing her daughters and their “special talents” to a slew of potential suitors, one of LaLaurie’s daughters is having an affair with a servant. The next morning shows Delphine starting her morning ritual by coating her skin in a coat of fresh human blood. Her servant Bastian reveals the affair and she confronts her daughter. Furious at the indignity, Bates takes the worker down to her basement where we see her staff shackled up and horribly deformed. As her torture starts, cut to the creepy credits.

Intense and as twisted as ever! Well done! RT @AHStory: What do you think of this years opening credits? #AHS

Cut to present day. Zoe Benson, Violet from the first season, brings her boyfriend home and they start having sex. All of a sudden, Charlie starts convulsing and dies from a brain aneurysm. Her mom reveals that she’s a witch, a genetic defect bestowed upon every generation of a family. Zoe’s mom sends her away to boarding school in New Orleans. As Zoe enters the academy, she’s confronted by several hooded figures who attempt a sacrifice. It turns out this is just a welcoming party by the other girls.

3. Witches Are Under Attack

Cordelia Foxx tours the school with Zoe and explains witches are a dying breed. Zoe and her students are at school to learn to control their gifts. Witches are being murdered and Foxx wants to give the girls a chance to protect themselves after a fellow wiccan was slaughtered who had the power of resurrection.

@AHSFX i love you the most.

Fiona Goode, the supreme witch, meets with a pharmacy rep to discuss a new aging serum. Goode, concerned about age talks with David about a drug that could restore youth. David can’t provide the concoction immediately which doesn’t satisfy Fiona. Inviting David to her apartment furious about the lack of results, Fiona traps him in her apartment and drains him of his youth.

@AHSFX i love you the most.

5. The Girls Reveal Their Powers

The girls gather for dinner and reveal their powers. Nan is clairvoyant. Madison has telekinetic powers and Queenie is a human voodoo doll as she stabs her own hand without pain hurting Madison.

6. Fiona and Cordelia Are Mother And Daughter

Fiona surprises her daughter as Cordelia unveils a restorative potion that she has been working on for her mother. Cordelia is technically “witch royalty” so her mother is disgusted with her lowly position at the school. Fiona came to the school to help the students learn to fight. A council is in charge of all witches.

"When are you going to die, and stop ruining my life?" #AHS

As soon as the girls walk in, they immediately attract attention. Madison wanders off to get a drink and Zoe meets frat boy Kyle Spencer played by Evan Peters. While Zoe and Kyle flirt, Madison gets drugged and raped. Kyle chases down the perps who filmed it only to be knocked out on the party bus. As they drive away, Madison uses her abilities to make the bus crash.

Zoe and Kyle is the new Tate and Violet. #AHS

8. Fiona Takes The Girls on A Trip

The Supreme takes the girls to the home of Madam Lalaurie the morning after the girl’s frat party incident. As they tour the home, we go back to LaLaurie torturing her victims. In order to stay young, she used a human pancreas as a poultice to coat herself in blood to revitalize her skin.

"The world isn't going to miss a bunch of assholes in Ed Hardy shirts." #AHS

9. LaLaurie Was Obsessed With Age

Maria Leveau, one of Lalaurie’s workers, offers her a potion that will restore her youth. Laveua, specializing in voodoo kills her (or so we think) since the slave she’s been torturing all episode was her lover. Cut back to the present day. Nan is sitting outside staring a particular patch of cement implying that Lalaurie is buried on the grounds of the house.

You'd think, this being the 3rd season, I'd be over that whole watching-with-my-mouth-agape thing by now. Guess not. #AmericanHorrorStory

10. Zoe Visits The Frat Boys In The Hospital

Furious with their actions, Zoe kills the frat boy responsible for raping Madison using her mysterious power. It’s revealed that Kyle died during the crash. Fiona moves into New Orleans and frees LaLaurie from her coffin under the cement proving Nan right. Fiona recruits Delphine for her help on figuring out how to prevent aging. Previews for the rest of the season show a war being waged between Marie Laveau and the rest of the school. Zombies and other creatures of the night will appear this season as well.

This was a solid start after last year’s brutally depressing season. I’m intrigued. Overall, I give the episode five stars. 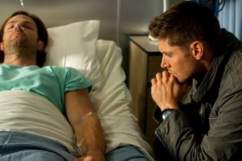