Jase Robertson, the outspoken COO of Duck Commander, and Phil Robertson’s son, is always ready to give his opinions, and his family, and America, is always listening. Here’s all you need to know about the always bearded and beanied father of three.

He’s been busy since last season, and released the book Good Call in May. The honest memoir talks about his decisions regarding family, religion, and of course, hunting.

As Duck Dynasty begins Season 6, we look forward to seeing more of Jase’s on-screen humor and touching moments with his family.

1. He Has Three Kids, Including Two Teenage Boys

Jase has been married to Missy for 23 years after meeting in high school on a fake date to make Jase’s ex-girlfriend jealous.
The couple has three children, Reed, 18, Cole, 16, and Mia, 10.

He told Fox News about how he parents in the age of social media:

I’ve had to sit down with both my sons and tell them that just because 1,000 girls say you’re the best-looking thing since sliced bread – that doesn’t mean it’s true,” he said. “They’re not mature enough to deal with that.

2. He Waited Until Marriage to Have Sex

According to Jase, it was Phil who advised him to wait, and he is grateful for it:

My dad told us to wait until we got married — do it God’s way,” he said. “I like the fact that my parents are so open about sex. I waited until I got married and a lot of the reason for that is because at an early age – my parents were real open.

Both Jase and his wife were virgins when they got married, Jase being six days away from turning 21 years old. He told Men’s Journal about his wedding night:

Well, on my honeymoon night, it wasn’t, like, you know – it was more like the little game operation. It was like –let me see what we got going on here.

The couple spreads the word about waiting until marriage. At the K-Love fan awards this summer, Jase said:

We were both virgins when we got married until our wedding night. We decided to do it God’s way and basically had a godly agreement that we would help each other get to heaven. A lot of people just think that that’s unreasonable or preposterous. But you know, if everybody chose to do it God’s way, the world would be a lot better off.

If God can use me to spread the knowledge of His Son…He can use anyone. – Jase Robertson #DuckDynasty pic.twitter.com/AHd9aasBOi

It was through seeing his father drunk that made him abstain.

I’ve never done drugs. And I’ve never been drunk. I didn’t drink when I was a kid, because my dad – going to the bar – I just said, ‘Whatever that is, I don’t want to do it.’

4. He Loves His Beard, But His Wife Does Not

The boys and their father have made a name for themselves with their long beards. Jase acknowledges that there are advantages to having lots of facial hair. Jase told Game and Fishing magazine that the beards are quite useful during duck season.

In duck season it’s cold, especially going down the river on an outboard motor, the wind chill is ridiculous. When you got whiskers, it’s the greatest thing you could have. It keeps your neck warm and your lips from getting chapped. And then of course it’s great camoflauge, which you know is so important for duck hunting.

A deeper message he sees behind the family’s beards is that it spreads the idea to never judge a book by its cover.

The beard also ties into our spiritual faith, that you shouldn’t judge a book by it’s cover. I don’t look at another human being and look at just their external appearance. Really I think if we looked at another person from the inside out we’d be a lot better off.

As for his wife, she isn’t too keen on the look. Jase told Fox News:

My wife hates the beard. When we dated, I would grow it out during duck season. she said she could handle anything for three months — but now I have it all the time.

There have been times when the beard has caused him trouble.

On Live with Kelly and Michael, Jase told the hosts how his time in New York City took a strange turn when he was “facially profiled.”

I asked where the bathroom was and he said, ‘Right this way, sir.’ He was very nice, he walked me outside, pointed down the road and said, ‘Good luck.’

Don't panic! There is a place in society for smooth faces. #LadiesRoom #RedSoxSecretWeapon

To stand out on the show amidst all the beards, it is very helpful that Jase never leaves home without his signature black hat.

He even wore it on stage at the Country Music Awards.

Jase wore his beanie on stage? To the CMA's? Seriously?! #DuckDynasty pic.twitter.com/uvsTIR2gRE 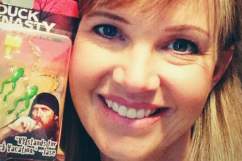