During Donald Trump’s opening monologue on Saturday Night Live, someone yelled out that Trump is a racist and it was Larry David. David has been appearing on SNL to impersonate Bernie Sanders. Tonight he yelled, “You’re a racist!” Trump responded by saying, “I knew this was going to happen, who is that?” David then yelled, “Trump’s a racist! I heard if I yelled that they’d give me $5,000.” David’s statement alludes to the Deport Racism PAC which had promised a bounty for anyone who would disrupt Trump on live TV. Trump’s response to this was, “Hey look, as a businessman, I can fully respect that.”

Check it all out in the above clip. 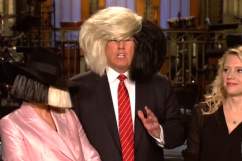