Dana Bash is CNN‘s chief political correspondent, serving as a town hall and debate moderator for the network. She’s covered every presidential campaign for the network since 2000.

The 46-year-old Bash was CNN’s principal correspondent on the 2016 Republican presidential primary campaign. Since the end of the 2016 campaign, Bash has been covering Congress and hosts CNN’s new webseries Badass Women of Washington.

Here’s what you need to know about Dana Bash.

Bash, who was born Dana Ruth Schwartz in New York City, has been married and divorced twice. Her first husband was Jeremy Bash, the former Chief of Staff of the U.S. Department of Defense and CIA during the Obama Administration. In both roles, he worked with Leon Panetta. Today, Bash frequently appears on MSNBC and NBC News as a national security analyst. Bash and Jeremy Bash were married from 1998 to 2007.

Bash’s second husband was John King, who hosts CNN’s State of the Union. King and Bash were married for four years from 2008 to 2012. They have one son, Jonah Frank King, who was born in June 2011.

Today, Bash is dating actor Spencer Garrett, whose credits include Mad Men and House of Cards. According to The Washington Post, they met in 2013 after being introduced by mutual friends. They were recently seen together on the red carpet for Samantha Bee’s Not The White House Correspondents’ Dinner in April. 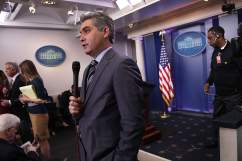 2. Trump Told Bash It Was ‘Very Rude’ of Her to Ask Why He Was at a Hotel Ribbon-Cutting Instead of Campaigning in October 2016

Bash interviewed future President Donald Trump throughout the 2016 presidential campaign. During one of her last interviews with him before the election, Trump told Bash that it was “very rude” of her to ask why he wasn’t spending his last days as a candidate planning more campaigning in battleground states. She spoke with Trump at his Trump International Hotel ribbon-cutting ceremony in Washington.

During a panel discussion in February, Bash admitted that CNN made several mistakes during the campaign when predicting that Hillary Clinton would beat Trump.

“We relied so much on data,” she said. She recalled a trip to Philadelphia after the Access Hollywood tape leaked, and suburban white women told her that they didn’t care about it. She also said millennials were “totally vanilla” about Clinton. 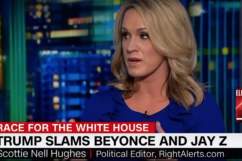 3. Bash’s Father Worked for ABC News & Her Mother Is a Jewish Studies Educator

Dana Bash gets "snowballed"CNN reporter Dana Bash receives some choice words from Ron Paul supporters who object to her consistently negative and biased coverage of Dr. Paul during the 2012 presidential primary race. The title of this film references the blowback that Sean Hannity received during the 2008 race. No actual snowballs were thrown. Not affiliated or paid…2012-01-13T07:14:00.000Z

Bash was raised Jewish and grew up in New Jersey. She attended Pascack Hills High School in Montvale. Her father is Stuart Schwartz, a retired ABC News producer. Her mother is Frances Weinman Schwartz, a Jewish studies educator. Bash also has a younger brother.

According to the Jewish Standard, Schwarz frequently moved between the New York and Washington, D.C. areas. After moving to Teaneck when she was 2, the family moved to Washington. When she was 13, they moved back to New Jersey. “I found out that I was moving back to New Jersey on the day of my bat mitzvah,” she told the Standard.

While her father influenced her interest in news, her mother was an influence on her religious life. After Bash started college, her mother enrolled at Hebrew Union College in Manhattan to get a Masters in Jewish studies. Frances Schwartz published a book The Jewish Moral Virtues, co-written by Rabbi Eugene Borowitz.

Bash has a degree in political communications from George Washington University in Washington. She is now a member of Temple Micah.

Bash has been at CNN for over two decades. As she explained to the Jewish Standard, she decided in 1993, during her senior year in college, to call CNN to see if they needed “vacation relief” and started working behind-the-scenes. “I would be responsible for pressing play and record and sending things down to Atlanta, our home base at the time,” she explained. Since then, she has steadily become one of the network’s most visible anchors.

Bash’s CNN bio notes that she was responsible for breaking a 2002 story on the U.S. government’s secret intercepts of Al Qaueda translations the day before the September 11, 2001 terrorist attacks. That reporting earned her a Everett McKinley Dirksen for Distinguished Reporting of Congress Award from the National Press Foundation. She reported from Congress for CNN in the days after the terrorist attacks.

Since then, Bash has been part of every CNN election cycle coverage. In 2016, she was the primary correspondent covering the Republican primary and was a questioner in six of the seven CNN debates.

Today, one of her big projects for the network is Badass Women of Washington, a web series where she interviews important women in the nation’s capital.

“There are already so many women in Washington doing really great work who have broken barriers and who are not necessarily well-known – in some cases, unsung. It took on a life of its own from there,” she told Variety of the series.

5. Bash Was 9 Months Pregnant When She Broke the News That Anthony Weiner Resigned

Questions surround lawmaker's tweetCNN's Dana Bash and Jeffrey Toobin weigh in on the controversy about a Democratic congressman's rogue tweet.2011-06-01T05:50:25.000Z

Bash is known for her commitment to stories, even putting it ahead of her personal life. For example, she was nine months pregnant when she reported on disgraced former Congressman Anthony Weiner‘s resignation.

“That’s a perfect example of a case where my gut told me he was full of it. Maybe it’s the Jerz in me,” she told NJ Monthly in 2015. “He was so media friendly and all of a sudden he clammed up and I just sparred with him. You’ve got to give as good as you get in those situations, particularly when I’m Jerz [and] he’s New York. Let’s go at it.”

In that same 2015 interview, Bash said it was important for reporters to “ask the questions that make everybody uncomfortable,” adding, ““Because I’m comfortable here and I’ve been doing what I do so long, if they’re not going to answer my question or they get mad at me, it’s okay.”