Ed Sheeran has arrived at the 2017 MTV Video Music Awards!

Unsurprisingly, Sheeran did not walk the blue carpet with his longtime love, Cherry Seaborn. Instead, he came out with actress/dancer/model Jennie Pegouskie, known for touring with Macklemore and Ryan Lewis. Sheeran was dressed in his typical casual fashion, wearing a pair of slacks with a blue t-shirt under a collared button-down. He finished off his look with a pair of sneakers.

The crowd went wild, filling the air with screams as Sheeran walked on the blue carpet, posing for a few photos. There aren’t many girls that don’t love the red-headed singer/songwriter. He just has a way with the ladies!

Sheeran was also nominated for Artist of the Year, going up against Kendrick Lamar, Bruno Mars, Ariana Grande, Lorde, and the Weeknd, and won in the category, taking home his second VMA ever.

He won his first Moon Man (now called a “Moon Person”) back in 2014 for the song “Sing” featuring Pharrell Williams.

Earlier this summer, Sheeran made a cameo appearance on Game of Thrones. He received some pretty harsh criticism and ended up deleting his Twitter account. However, he recently reactivated his account. Even still, his last tweet was on July 17. Perhaps he’s anticipating a win at the VMAs tonight and plans on posting a status.

Below are some photos of Sheeran arriving at the VMAs. More photos will be added throughout the night, so be sure to check back often.

Below are some photos from Sheeran’s performance. He sang “Shape of You” and was joined on stage by Lil Uzi Vert — something he teased on Instagram earlier in the day. 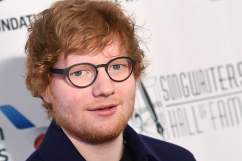 Ed Sheeran Net Worth: 5 Fast Facts You Need to Know