A woman named Stephanie Woods is claiming to be Tristan Thompson’s side chick. After videos and photos of Thompson surfaced, showing him arriving at a hotel room in New York with a woman who wasn’t Khloe Kardashian, Woods took to Instagram to claim that she was the other woman. She shared some Instagram posts that were uploaded by The Shade Room and captioned them with things like, “Let us be happy.” Woods’ Instagram “name” is “Kim Kardashions Oldest” (spelled that way).

Later on in the night, Woods decided to upload a sex tape to the social media platform. The video didn’t show any faces, but it appeared to be Woods’ attempt to out Thompson. Instagram deleted Woods’ account, so she posted the sex tape on Snapchat. Woods tagged Thompson in the video.

Woods also shared a series of explicit text messages that she claims were from Thompson.

“If I was there I would grab u while u try to walk away from me than I would pull ya hair and kiss you than rip ya clothes off and lay u down while I **** your ***** and say sorry. Than (sic) I’ll stick this long **** in you, slow but deep,” read one message, according to Perez Hilton.

Woods later wrote that she is pregnant.

Woods is not back on Instagram, despite some fake accounts that have been created. One account uploaded a couple of photos, including the re-post from The Shade Room showing Thompson with a woman outside his hotel in New York City, and a picture of Thompson with the caption, “O.U.R.S.”

The account only follows a handful of accounts. You can see them below.

The media previously identified the woman with Thompson as Instagram model and gentlemen’s club bartender, Lani Blair. Blair has made her Instagram account private and has not responded to any of the reports.

Thompson has been dating Khloe Kardashian since 2016. Kardashian is pregnant with the couple’s first child, and is due to give birth to a baby girl any day now. According to Us Weekly, Kardashian is still planning on giving birth in Cleveland, where she and Thompson have made a home.

Thompson has one son, Prince, with his ex-girlfriend, Jordan Craig. Thompson met Kardashian shortly after his split from Craig, who found out that she was pregnant with his child after the two parted ways. Some people believe that Thompson cheated on Craig with Kardashian and that him allegedly cheating now is just “karma.”

Neither Kardashian nor Thompson have commented on this story. Kardashian’s family has been posting on social media regularly and seem to be operating under a “business as usual” mentality. 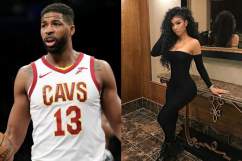