Netflix Charles "Chuck" Thompson was convicted of a double murder of his girlfriend and her lover in 1999, and is featured in Netflix's docu-series "I Am a Killer."

Charles “Chuck” Thompson was convicted of murder and sentenced to death for the murder of his girlfriend, Dennise Hayslip, and her lover, Darren Cain, in April of 1998.

Thompson made headlines after the trial when he escaped from a Houston jail by forging an ID badge and claiming to be with the Attorney General’s office. He was captured a few days after his escape.

Thompson is currently appealing his death penalty conviction. He is featured on episode five of the Netflix true crime docu-series “I Am a Killer,” the episode of the title being “Intended Evil.”

1. Thompson Shot Cain and Hayslip After Finding Them in Bed Together

me: i want something light and funny to watch
netflix: I Am A Killer, a series about murderers on death row
me: yes this is perfect

“I had met [Cain] several times, but I never knew that he was seeing my girl,” Thompson said. “Apparently she was already seeing him [while we were together.]”

The night of the murder, Thompson said, they went out to the bar, then went home later that night. “Darren called at about two in the morning, because he wanted to be with her again. We ended up getting into a fight, and the sheriff came and told us both to leave.”

Thompson explained that he came back at six in the morning to find Cain in bed with his girlfriend. “One thing led to another,” Thompson said, “And from what I can recollect, he grabbed a french knife from the kitchen and began threatening me…and I told him, ‘Hey, you need to put the knife down.'”

Thompson said that what happened next was a blur. “I remember he came at me…it’s just a big blur.” Thompson further explained that Hayslip was only shot because she moved in between them while they were fighting.”

After the fight had ended and Thompson thought both Cain and Hayslip were dead, he said, “I ran. I left. I freaked out.”

2. Hayslip Died Later in the Hospital, & Thompson’s Lawyer Argued That Her Death Was Therefore Not Thompson’s Fault

Netflix just dropped a series called “I am a Killer” about death row inmates giving first hand accounts of their crimes. Looks like I know where my weekend will be spent.

After the altercation took place, Thompson told Netflix that he went to a friend’s house, which is where he was when he found out that Hayslip was still alive.

“They had her coming out with the bandage on her face, sitting up on the stretcher,” Thompson said. Shortly after, he called his father, who suggested that he turn himself in, which is exactly what Thompson did.

Though Hayslip wasn’t designated to be in critical condition, she somehow “lost air” before surgery, and ended up becoming braindead. This was an important distinction in Thompson’s case, as he is still arguing that he didn’t technically kill her; rather, there were complications in the hospital akin to malpractice. Thompson adds that Hayslip’s family sued the hospital for wrongful death, further bolstering his argument.

3. Hayslip’s Direct Cause of Death Was a Loss of Oxygen for Five to 10 Minutes

I AM A KILLER Documentary on Netflix is a must watch.

Dr. Paul Radelat, the expert medical witness for the defense at Thompson’s trial, maintained that the doctors “were trying to do their best,” even though Hayslip’s death was technically caused by her breathing tube becoming dislodged from her windpipe.

“[The doctors] intended no evil,” he said. “The shooter, I think we can say, intended evil.”

Eventually, the malpractice suit for Hayslip’s death culminated with the jury deciding that hospital staff were not at fault. Therefore, Thompson was convicted for both deaths.

4. Wade Hayslip, the Son of Dennise Hayslip, Blames Thompson for His Mother’s Death

God damn it, @tomsegura ! I've been binge-watching I Am A Killer on @netflix for four straight hours now. My children are starving and the couch is on fire! Ah, well…on to episode 5.

“She’s not in the hospital if you don’t shoot her,” Wade Hayslip, Dennise Hayslip’s son, said. “Ultimately, the truth is that you held a gun to somebody’s face is because you pulled the trigger.”

Wade Hayslip described his mother as a kind individual, and added that he hopes Thompson understands the weight of what he’s done. ”

Wade Hayslip also added that Thompson’s testimony didn’t include the fact that the door was smashed open, implying intent, and that Thompson’s argument that he’d found the gun in the apartment didn’t make sense, because the fight had taken place in the living room and kitchen and her gun had been in a back closet. Wade Hayslip said, “I feel like this is like a five-year-old, when you know you caught them doing something wrong, and they continue to maintain they didn’t do it, even though you literally saw them do it.”

5. Thompson Was Caught on Camera Talking to a Fake Hitman Who Was Really an Undercover Cop

Yea, I don’t believe a word that dude Charles Thompson is saying on #IAmAKiller. Abusers ALWAYS claim that they only hit their spouse “one time”. So far, out of all the episodes I’ve seen, this dude definitely deserves the death penalty.

While Thompson was in jail during his trial, an undercover cop posed as a hitman, recording Thompson saying he wanted him to kill the witnesses in his trial.

The recording was one of the pieces of evidence that tipped Thompson’s sentence from a life sentence to a death sentence, which the jury eventually ruled in favor of in 1999.

Thompson is still serving out his death sentence. He received a re-trial five years later, and received the death sentence yet again. Now, he’s waiting out his sentence in a Texas jail, and writes for the blog “Between the Bars.”

When Thompson was told that Wade Hayslip thinks that the death penalty is an appropriate punishment, Thompson told Netflix in a followup interview, “To carry a torch for someone to die for twenty years, it’s…you know…I couldn’t hate somebody for that long. It’s not in my blood. You know what they say about hate: it’ll eat you up inside.” 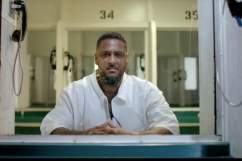