TLC/YouTube Megan Davis is 24 years old and weighs 604 pounds when she seeks out the help of celebrity bariatric surgeon Dr. Younan Nowzaradan on tonight's episode of "My 600 Lb Life."

Megan Davis, 24, weighs 604 pounds and is the subject of tonight’s April 1 episode of My 600 Lb Life, which airs Wednesday at 8 p.m. ET on TLC. The young reality star was dangerously obese and at risk of losing her life when she decided to seek out the help of celebrity bariatric surgeon Dr. Younan Nowzaradan in order to shed some weight and regain control of her life.

The TLC description of Season 8 Episode 14, titled “Megan’s Story,” reads, “At 24 years old and over 600 pounds, Megan lives at home with her mom, who cooks for her since Megan can’t do much on her own. Now, Megan must travel to Houston to meet Dr. Now and change her eating habit or her life may end before it ever begins.”

Here’s what we know about the reality star and her journey ahead of the new episode. (Warning: some spoilers on Megan’s story ahead! Turn back now if you don’t want anything ruined for you before the episode airs!) 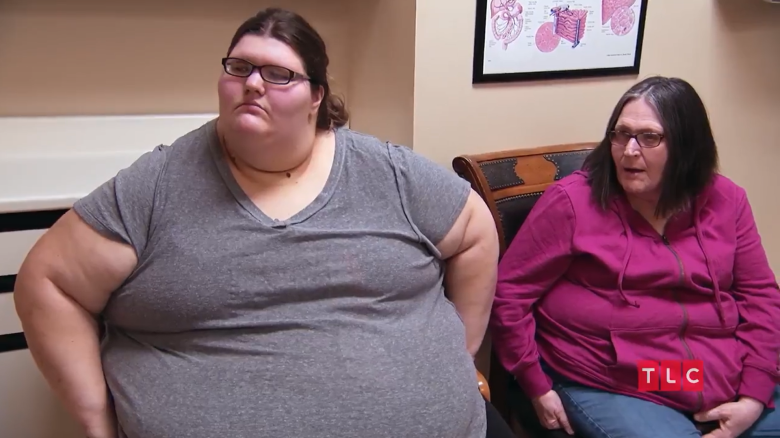 Megan’s issues with food addiction began at a very young age, according to the reality star. By the time she was 6 years old, Megan weighed nearly 200 pounds. “When I eat, I feel a sense of comfort, love, a sense of fullness,” Megan explains during tonight’s episode. She calls her relationship with food her “constant best friend.”

Although the reality star has struggled with her weight for her entire life, she says she is ready to make a change and lead a healthier lifestyle. “I just can’t continue to live like this, it’s a living hell,” she tells the camera tearfully. She admits that she’s gotten “too big” to take care of herself and has to depend on her mother for nearly every aspect of her life.

Megan finally decides to head to Houston to meet Dr. Now, who she hopes will be able to help her get her life back on track. “I know my health is really bad now because the more I move, my breathing gets worse and worse,” she says during the episode. Although the drive to Houston is long and arduous, the reality star is excited to see where her journey takes her. She hasn’t been out of her mother’s house in a long time due to complications with her weight, so Megan is happy to see the countryside during the drive.

However, when Megan finally arrives in Houston, Dr. Now is concerned about her other health conditions on top of her weight issues. He tells the reality star, “It’s shocking to see so many medical issues in someone so young,” and notes that her medications are typically meant for someone in their 50s, 60s or 70s.

She Loses Enough Weight But Isn’t Approved for Sleeve Surgery

Megan’s progress with Dr. Now is slow and steady; it takes the reality star several attempts before she finally starts making any progress, and it takes even longer for her to take responsibility for her bad food choices.

However, she makes small strides in losing weight throughout her journey, losing 14 pounds by the three-month mark, and 32 pounds by her next checkup. Although Dr. Now isn’t impressed with her slow progress, he does note that she’s staying consistent; by her next weigh in, she loses 37 pounds, for a total of 84 pounds since the program started.

Despite her slow and steady progress, Megan sadly doesn’t get her sleeve surgery. Although she loses enough weight to be approved for the procedure, weighing in at just under 500 pounds by her final checkup, Dr. Now is concerned about her other health issues. He tells Megan, “As much as I’d like to tell you we can move ahead with your weight-loss surgery, it looks like it is too risky still and that you need to lose more fat in your body by losing more weight.”

Although she isn’t approved for her surgery, Megan is determined to continue working hard to live a healthier lifestyle, and Dr. Now tells her that he is more than willing to keep monitoring her health on a monthly basis. Despite not getting her surgery, Megan remains optimistic about her future and is still working to lose weight by the end of the episode. We expect to see the reality star on a followup episode of My 600 Lb Life in the near future.

My 600 Lb Life airs Wednesday nights at 8 p.m. EST on TLC. You can find more coverage on the Season 8 cast and subjects here.

Read More
My 600 lb Life, Reality TV, TV
Megan Davis is 24 years old and weighs 604 pounds when she seeks out the help of celebrity bariatric surgeon Dr. Younan Nowzaradan on tonight's episode of "My 600 Lb Life."