Love & Hip Hop creator Mona Scott-Young was recently slammed by some of the previous stars of the franchise. In an interview with MadameNoire, Scott-Young said she is criticized more harshly than Andy Cohen of the Real Housewives franchise and Carlos King, who produced Real Housewives of Atlanta.

“We’re held to a different standard. We’re scrutinized very differently,” she said. “I don’t think anyone stops to think about how difficult it is to be competitive in this space. I’m one of the few Black women who own a physical production company. That in itself is an accomplishment I don’t think many people stop to credit and understand that it isn’t easy.”

Former Love & Hip Hop: Hollywood star Milan King chimed in via an Instagram post and said that Scott-Young is treated differently because of the conduct she allows while filming.

“CUT THE SHIII we can all count on 1 hand how many actual physical altercations happen on rhoa but EVERY episode of LHH black people (woman) are physically attacking each other weekly,” he wrote in a now-deleted post that was captured by The Neighborhood Talk. “Something in which you & your production company condone! Whereas the other ie @bravoandy do not. Some fights actually result in pay cuts, suspension or even being fired from the RHOA franchise. Go have a seat with your manipulative evil ahz. It’s black empowerment year & your divisive energy ain’t needed in the world today! Thanks in advance from an EX cast member!”

A post shared by The Neighborhood Talk, LLC (@theneighborhoodtalk)

Joseline Hernandez, who was a part of the Atlanta and Miami cast, commented under his post saying: “May I? This Ho.” Her comment was then reposted on The Neighborhood Talk and she explained in the comment section why she isn’t fond of Scott-Young anymore and even implied that she has slept with some of the cast members.

“But production nor Mona tells us to fight,” she wrote. ” Mother******** just be mad as f*** or they want clout and they do it on their own …. I hate when cast members blame production for their actions!!”

She added: [Love & Hip Hop] scenes are filled with security that real s*** can’t be done anyways!!! that’s why it’s so much drink throwing cuz that’s really all a b**** can get away with doing….. there are other shows with way less security and definitely waaaayyy more aggressive fighting than lhh!”

Miami Tip also said that some of the cast members who have fought have actually had their checks put on hold because of their actions.

“And I know a couple cast members who have gotten their checks withheld due to fighting … I’m speaking on my experience with the franchise and giving MY opinion!” 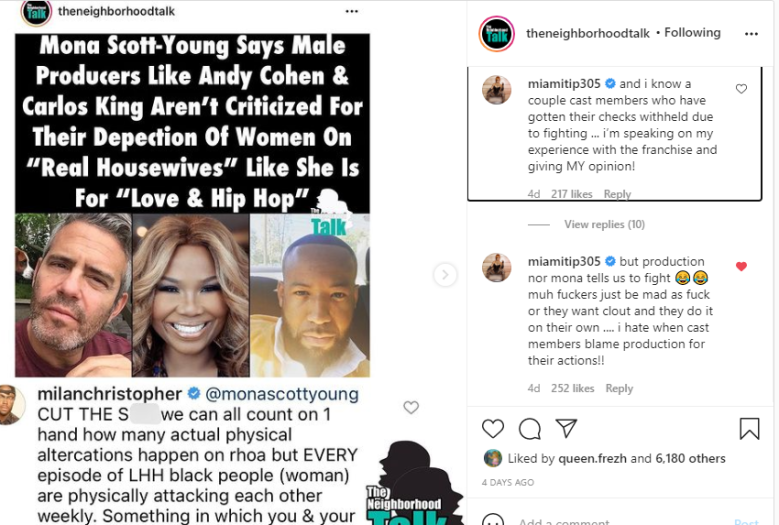 Loading more stories
wpDiscuz
0
0
Would love your thoughts, please comment.x
()
x
| Reply
Some of the previous cast members of the VH1 reality show aren't too fond of Mona Scott-Young.