Last episode of “The Challenge: Spies, Lies and Allies” shocked fans as TJ Lavin announced that Ashley Mitchell was deactivated from the game for a rule break that happened off-camera and wasn’t explained by the network or the cast. After it aired, several spoiler accounts gave unverified reports about what happened, alleging that Ashley’s removal came following a verbal altercation with Josh Martinez.

On the “Death, Taxes and Bananas” podcast, Marie Roda told Johnny Bananas she didn’t want to speak about what she’d heard had happened but that fans can search on the Internet for the answer. Nelson Thomas was the first cast member to speak about it and confirmed that Ashley had “unfortunately crossed the line” during an argument with Josh but didn’t reveal exactly what happened because he said, “that’s not who Ashley is, she’s a good friend of mine and a good person.”

Ashley’s disqualification and the lack of explanation infuriated many fans of the show who criticized the network and called out Josh, accusing him of being responsible. In the last day, several more “Spies, Lies and Allies” stars have addressed what happened and clashed with Ashley.

In light of a lot of the support for Ashley and criticism of Josh flooding social media, Tori Deal and Devin Walker slammed the narrative, with Tori writing, “For the record, Josh is not the reason Ashley got sent home. Josh is NOT the instigator… he is a victim in this situation. I’m not gonna go into details, but I can’t f****** stand people slamming Josh right now. None of you were there… the people who were know what happened. Leave Josh the f*** alone.”

Devin wrote, “Notice NOT A SINGLE PERSON including Amanda is coming to Ashley’s defense about why she was deactivated? Think maybe that’s for a reason? Think maybe a troll account with Ashley’s face as a profile pic isn’t a good source of accurate info? Josh/myself/Logan/anyone else had nothing to do with the repercussions of her hurtful, ignorant and misguided actions.”

In his Instagram Story, Emanuel Neagu also wrote that Josh “was a victim… more of Ashley cause Amanda was just there laughing mostly… She got DQed for many reasons anyways but that day was when she simply exploded.”

In a Video, Ashley Spoke About Her Co-Stars Bullying & They Called Her Out 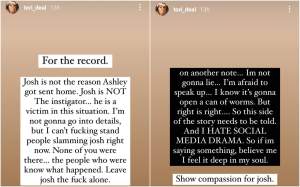 A “Challenge” gossip account shared a clip of Ashley speaking about “War of the Worlds 2,” when she was working with Cara Maria Sorbello and Kam Williams. She said on that season, Nany Gonzalez and Tori accused them of being bullies. “We weren’t bullying them, we just were voting them out cause they weren’t in our alliance,” Ashley explained. “And now to see them actually bullying their actual friends, I’m like man the hypocrisy is strong.”

Several of Ashley’s co-stars called her out in replies to the clip, with Tori writing that she’s waiting patiently for the clip of them bullying to come out, while Nany wrote, “My mother didn’t raise a bully, I’ll tell you that much.” Kaycee Clark replied to Nany’s comment and said, “Babe, you already know real recognize real and Ashley ain’t it.”

Nany also wrote, “For someone who came into this season BEGGING for friends and an alliance to trust her… she is now doing exactly what we know her to do. Being a fraud. Don’t dig yourself a deeper grave girl… it’s big enough.”

Kayce also wrote, “[Tori] you know sometimes when your back is against the wall you have to say whatever it takes to make yourself look good… nice try Ashley but the world wasn’t born yesterday.” Ashley’s sister Whitney Mitchell, on the other hand, tweeted that she was “having a really hard time keeping my mouth shut.”

Ashley replied to her co-stars’ criticisms of her latest comments in a series of posts on Twitter, writing, “I have not once tried to defend my actions nor am I going to ever. I have not looked for sympathy or even talked about what happened.” She did specify in one Twitter reply that she never said the “f word.”

She said she never called anyone bullies but clarified that her friends were not bullying anyone on “War of the Worlds 2.” She added, “I will never stick up for my idiotic words and actions but I will die on this hill knowing my actual self and heart are not the narrative the gang is trying portray. And OF COURSE!!! I don’t expect my friends to stand up for my ugly behavior, although I have stood up for others gross actions.”

Hughie Maughan replied to one of her tweets and said, “Ashley the girl I met is lovely, caring and so funny, we had amazing times together and I know all your stories and all your freinds from all walks of life, I know where you’ve been and what you intend to be going forward, for me your amazing and my time with you was,” along with three heart emojis. Ashley replied, “I needed this so much. I’m on the edge hunny. I’m not sure any of this is worth it anymore.”

Ashley previously tweeted that she respected “The Challenge” and TJ’s decision to remove her from the game and thanked everyone who stood by her through that period. “Everyone knows I’m only mad at myself and it has been so hard to shake off the depression and anxiety since getting home,” she wrote. “I have been taking anger management and reflecting alot. I love you yall so much.”

Loading more stories
wpDiscuz
0
0
Would love your thoughts, please comment.x
()
x
| Reply
Several stars of 'The Challenge' called out the narrative around Ashley Mitchell's DQ and some of them criticized her for comments she made.