Lisa Vanderpump has revealed the identity of the “Real Housewives” star who gossiped about Erika Jayne and Tom Girardi’s problems years before their divorce and Girardi’s embezzlement lawsuits began playing out in the headlines.

In an interview with The Daily Mail, the original “Real Housewives of Beverly Hills” star she heard about who spread rumors about the former couple’s troubles back in 2019 at Bravo host Andy Cohen’s baby shower. The gala was attended by stars from multiple cities of the Bravo franchise.

While the outlet noted that Vanderpump was at first “reluctant” to spill the name of the gossip, she ultimately did so without saying the person’s actual name.

“Yes, it could be the person that Ken kicked out of my house,” Vanderpump said.

Fans know that during season 9 of the Bravo reality show, Vanderpump’s husband, Ken Todd, kicked Kyle Richards out of the couple’s Villa Rosa estate during an argument by saying,  “Goodbye Kyle!” The two women stopped speaking after the argument.

“It didn’t surprise me when Camille told me that it was Kyle that had told her the gossip about her supposed friend Erika Jayne,” Vanderpump told the Daily Mail. “That’s how Kyle works.” 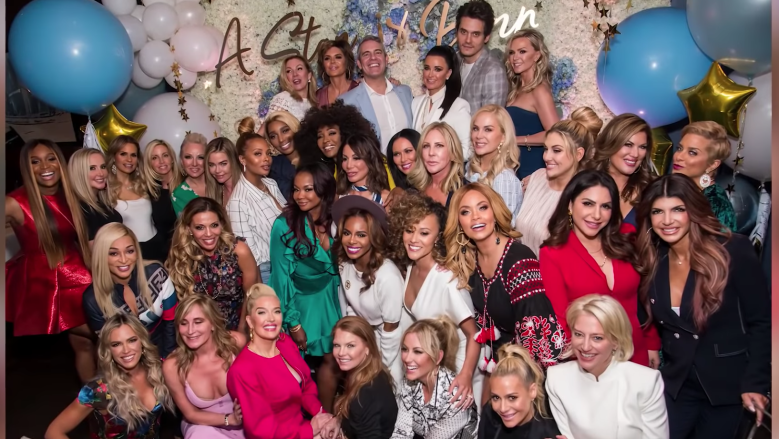 “RHOBH” fans know that Erika Jayne split from Girardi, her husband of more than 20 years, in late 2020. Since that time, the former attorney has been hit with a slew of lawsuits filed by people claiming to be victims of his California law firm.

The Girardi divorce drama has been a main storyline on the current season of “The Real Housewives of Beverly Hills,” but the in-house “Housewives” drama started before any of it was ever seen on the show. Earlier this month, former franchise star Camille Grammer was asked by a Twitter follower if she had heard about “the Tom and Erika rumors” before they were talked about on the show.

“Yes,” Grammer replied. “One of the housewives mentioned it at Andy’s baby shower.”

When another follower asked her for a hint as to who the mystery Housewife was, Grammer replied,  “A west coast HW. A so called “good friend” of hers.”

Erika Jayne has insisted that she did not know anything about her estranged husband’s legal and financial issues during their marriage, per Us Weekly. The former power attorney has been accused of stealing money from lawsuit victims that include widows and orphans.

While Richards has been by Erika Jayne’s side for most of this season, viewers saw her loyalty begin to wane in the most recent episodes of the Bravo reality show.

On the Sept. 15 episode of “The Real Housewives of Beverly Hills,” Richards, Dorit Kemsley, and their husbands were seen making fun of Erika Jayne’s situation during a dinner party. At one point, the group burst into laughter as they talked about a farfetched story about Girardi’s car flipping multiple times, leaving him unconscious for 12 hours, and Erika’s claim that she only allowed doctors to perform surgery on his ankle and not his brain, per Hollywood Life.

After the episode aired, Erika Jayne took to Twitter to post that it felt “great” watching the scene as her friends made fun of her behind her back.

Loading more stories
wpDiscuz
0
0
Would love your thoughts, please comment.x
()
x
| Reply
The former 'Real Housewives of Beverly Hills' star revealed who talked about the singer behind her back.