Anson Mount is an American actor whom moviegoers and television viewers may already recognize the ruggedly handsome actor for his work in the Britney Spears film “Crossroads,” the cult favorite horror flick “All the Boys Love Mandy Lane,” the acclaimed, if criminally underseen series “Hell on Wheels” and as Captain Christopher Pike during season two of “Star Trek: Discovery.” Mount made such an impression as the likable, capable and heroic Pike – a character that dates all the way back to the first pilot for “Star Trek: The Original Series” — during his 14 episodes of “Discovery” and three installments of “Star Trek: Short Treks,” that Trekkers around the galaxy clamored for him – as well as Ethan Peck, who played Spock, and Rebecca Romijn, who portrayed Number One – to get their own show.

Well, wishes sometimes do come true, as Mount will settle into the captain’s chair as Pike for “Star Trek: Strange New Worlds.” Paramount+ will launch a 10-episode first season on May 5, and the streamer has already announced that they’ve renewed “Strange New Worlds” for a second season.

Here’s what you need to know about Anson Mount:

1. Mount Has Made a Steady Climb up the Hollywood Ladder 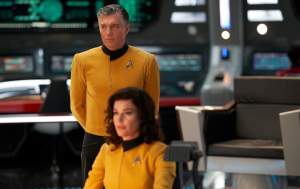 Russ Martin/CBSAnson Mount as Captain Pike and Rebecca Romijn as Number One in “Star Trek: Discovery”.

Mount was born on February 25, 1973, in Illinois, raised in Tennessee, and attended college at New York City’s Columbia University, graduating with a degree in theater. He made his television acting debut in an episode of “Ally McBeal” in 1999 and never looked back, amassing more than 50 film and television credits.

In addition to “Ally McBeal,” “Crossroads,” “All the Boys Love Mandy Lane” and “Hell on Wheels,” Mount has appeared in “Urban Legends: Final Cut,” “Line of Fire,” “Straw Dogs,” “Non-Stop,” “MK Ultra,” “The Virtuoso” and the current animated series ”Dota: Dragon’s Blood,” for which he provides a voice.

So far, his stints as a leading man – in “Hell on Wheels,” “MK Ultra” and “The Virtuoso” – have been a bit under the radar. “Strange New Worlds,” which will be promoted heavily and seen by millions, will no doubt launch him far higher into the Hollywood orbit. “When you go to acting school, the one thing they don’t teach you that, one day you’re going to be on set and everybody’s going to turn to look at you, and you’ve got to have the answers. I kind of was thrown into the deep end of the pool of leadership (with “Hell on Wheels”). And that helped me me to formulate (Pike), I’d say.”

“Strange New Worlds” is both a spin-off and a prequel, as Mount, Peck and Romijn were introduced as Pike, Spock and Number One on “Discovery,” and the new show unfolds on the iconic U.S.S. Enterprise, but before the era of William Shatner’s Captain Kirk.

“Strange New Worlds” promises a mix of familiar and fresh elements, and it starts with the ship’s crew. Celia Rose Gooding beams up as Uhura, while Jess Bush plays Christine Chapel, and Babs Olasanmokun co-stars as Dr. M’Benga. All three characters figured into “Star Trek: The Original Series.” Newbies on the bridge include Melissa Navia as Erica Ortegas, Christina Chong as La’an Noonien-Singh, and Bruce Horak as Hemmer.

Did anyone catch the last name of Chong’s character? She’s surely related to Khan Noonien Singh, the genetically engineered super-human played by Ricardo Montalban in the “Space Seed” episode of “The Original Series” and the classic “Trek” film, “The Wrath of Khan.”

Can someone be fated to enter the “Star Trek” galaxy? Maybe it’s inevitable, with 56 years of films and shows produced, that Mount would overlap with other actors associated with the franchise, but Mount’s connections are, well, out of this world.

Going back to “Ally McBeal,” Mount guest-starred in an episode alongside Kurt Fuller. Fuller was the runner-up to Robert Picardo for the role of The Doctor on “Voyager.” “Crossroads” co-starred Zoe Saldana and Kim Cattrall. Saldana plays Uhura in the J.J. Abrams “Star Trek” films, while Cattrall caused trouble in “Star Trek VI: The Undiscovered Country” as the duplicitous Valeris. The short-lived series “Line of Fire” starred Mount, Leslie Hope and David Paymer. Hope guest-starred in a “Deep Space Nine” episode as Kira’s mother, while Paymer played the doctor who told Picard he’s dying in the second episode of “Picard.”

The 2014 film “The Forger” featured Mount and the late Christopher Plummer, who chewed the scenery as the Klingon, Chang, in “Star Trek VI” and a couple of “Trek” video games. Mount and Colm Meaney – who played Miles O’Brien on “The Next Generation” and “Deep Space Nine” — shared the screen often throughout “Hell on Wheels.” Among Mount’s co-stars in “Virtuoso” was Diora Baird, who popped up as a gorgeous green Orion in “Star Trek (2009).” And, finally, the voice cast of “Dota: Dragon’s Blood” includes Mount, Michael Dorn –Worf on “The Next Generation” – and Tony Todd, who played three characters, including Worf’s brother, across “The Next Generation,” “Deep Space Nine” and “Voyager.”

4. Getting to Know Mount, the Man

Photographer Darah Trang and Mount married in 2018 and she goes by the name Darah Mount (Trang) on Instagram. She’s been by his side at a number of “Star Trek” events, including premieres and conventions. Mount and Trang welcomed their first child, Clover, into the world on December 4, 2021, with Mount sharing the news via Twitter on December 19. The family lives in rural Connecticut.

In addition to acting, Mount co-hosts a podcast, “The Well,” with his friend, filmmaker Branan Edgens. “The elevator pitch is that it’s kind of like Radiolab, but instead of stories about science, it’s stories about creative thinking,” Mount told the official Star Trek Magazine. “We come at it from all different angles, from not just artists, but we have a biologist, a football coach. We’ve got astrophysicists. Doug Jones (did) an interview with us. People should check it out.”

In early 2022, Mount was co-writing a three-book fiction series with Stuart Stevens, a political strategist and author.

5. Mount Is Making Pike His Own Character

Mount grew up watching – and loving – the original “Star Trek” series, he told Star Trek Magazine. So he jumped at the opportunity to audition for “Discovery,” though he originally auditioned to play season one’s villain, Captain Lorca, which went to Jason Isaacs. “I was close to getting Lorca, actually,” Mount told Star Trek Magazine. “I’ve got to say, they hired the right guy. I’m a big Jason Isaacs fan.”

When the Pike role came around, the producers asked Mount’s reps if he’d audition for “Strange New Worlds.” He agreed to do so and won the role. Mount had seen Bruce Greenwood play the character in “Star Trek (2009)” and “Star Trek Into Darkness” several years earlier, and, in advance of “Discovery,” he watched Jeffrey Hunter as Pike in the original “Trek” pilot, “The Cage,” and Sean Kenney as the disfigured version of the character seen in “The Menagerie” two-parter.

“It’s funny; I steal a lot as an actor, but I didn’t really want to steal anything from any of these guys,” Mount told Star Trek Magazine. “For some reason, I felt like I needed to be respectful of what was there, but make it my own.” Mount eventually met Hunter’s son, Christopher, in 2018, and Sean Kenney at a “Star Trek” convention. “Meeting Chris was incredible,” Mount told Star Trek Magazine. “He traveled all that way to Comic-Con just to tell me he thought his father would be happy with me being cast. And Sean is such an old-school Hollywood guy.”