On July 23, MTV uploaded a “Teen Mom 2: Sneak Peek” that centers on an emotional Brianna DeJesus.

In the clip, seen below, DeJesus tells Devoin Austin II, “Thank you, thank you for loving Stella. She loves you so much.”

Austin replies, “Thank you for letting me love her.”

That’s about as good as it gets, though, before things turn sour.

Brianna DeJesus: ‘the Last Time You Helped… Was a Few Months Ago’

After the two shared their touching moment, Austin was asked whether or not he’s working.

That’s when DeJesus piped in, “The last time you helped financially, as far as a bill, was a while ago. It was a few months ago.”

After that, the two start throwing swear words at one another.

On May 25, Austin clapped back at “Teen Mom” on the comments section of their Instagram page, writing, “I wonder why they never wanna… talk about my boo (which I live with and has been the same throughout ALLLL these seasons.)”

According to The Sun, Austin has been dating, his girlfriend, Jazmine Williams, since 2014. However, as highlighted by the outlet, she has never been featured on the show.

A source previously told The Sun that Austin was keeping his girlfriend “low-key,” adding that the two met on social media after direct messaging one another.

The source stated, “She doesn’t have any kids of her own, but she gets along well with Devoin’s daughter and enjoys spending time with her.” 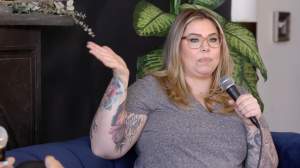 In early July, “Teen Mom’s” Kailyn Lowry filed a defamation lawsuit against DeJesus for making “untrue statements,” according to People.

In the complaint, People reported, Lowry said that DeJesus had previously accused her of “physically beat[ing] [Chris] Lopez up.”

A spokesperson for Lowry told the outlet, “Kail is disheartened by the recent untrue statements made by her fellow castmate, Briana Dejesus, concerning Kail’s absence from a recent episode and involvement in crimes that she never committed. Kail takes these statements very seriously.”

The statement continued, “After necessary self-reflection, Kail has decided to handle this situation with Ms. Dejesus by exercising her legal right to protect herself and her brand in Court. She is hopeful for a quick resolution of this matter so this feud can finally be put to rest.”

This isn’t the first time Lowry has spoken out against a costar.

On July 22, Lowry slammed Lauren Cameau, Javi Marroquin’s ex, insisting that she assaulted him during a physical confrontation.

As pointed out in a previous Heavy article, Lowry said during an Instagram Live, “From what I understand, Lauren knew I was going to… Wyoming to visit a friend. Javi asked if he could come and I said absolutely… [Lauren] got really upset that, I guess, Javi asked for Eli. As soon as he asked for Eli– this is the story that I’m told– she punched him in the face, several times, and kicked him when he was down.”

Marroquin subsequently joined Lowry’s Instagram Live to corroborate what she said about Comeau.

Loading more stories
wpDiscuz
0
0
Would love your thoughts, please comment.x
()
x
| Reply
Who loves who so much? Get the details from this "Teen Mom 2" sneak peek.