Getty Grande will be judging a new season of 'The Voice'.

Fans are opening up about what Ariana Grande was like during her first few days as a coach on “The Voice.”

Speaking to E! Online, an eyewitness who attended the Blind Auditions said, “Ariana was so fun and sweet.  She was interacting with the fans so much and was having the cutest moments on and off camera with the coaches. She was so sweet to anyone who came up to her from the production team, as well. Ariana and Kelly Clarkson were talking selfies. It was so cute.”

Another source told the outlet that Grande and judge Blake Shelton “are so funny together.”

The source said that Grande was “fitting in so well well already.”

Grande Handed Presents Out to Her ‘Voice’ Team Members

One eyewitness told E! that Grande had a small lunchbox “filled with goodies for whoever chose to be on her team” and that “she was so excited to hand them out.”

On March 30, Grande announced that she would be joining a new season of “The Voice”.

“surprise!!!” she wrote on Instagram. “I am beyond thrilled, honored, excited to be joining @kellyclarkson @johnlegend @blakeshelton next season ~ season 21 of @nbcthevoice! @nickjonas we will miss you.”

Grande has also recently posted photos of outtakes from her time on “The Voice”.

When Shelton appeared on “Today with Hota & Jenna,” he discussed what it will be like having Grande on the show for the upcoming season.

“I’m excited about it,” Shelton told Today, per Talent Recap. “I’m a fan of hers, I’m not gonna lie. We’re still going to beat the crap out of her, you know, on the show. It’s our job- they pay us to win, Hoda. They don’t pay me to lose.”

Other judges have also weighed in on what it will be like having Grande join the judges’ panel.

In May, Clarkson said on her daytime talk show, “… if you pick Ariana Grande [as your coach], I will kick your a**. Cause she is definitely my biggest competition next season. They said she was signing on, and I was like, ‘We’re all going to lose.'”

She added, “I love her though. I’m excited about it.”

In March, a source told Page Six, “Ariana is a huge fan of ‘The Voice’ and her management team has been negotiating to get her on the show for a while… She is replacing Nick Jonas, who is a [coach] on the current season, but he isn’t leaving for good. Nick will remain on rotation with other stars that have appeared on the show. The chances are he will be back soon.”

When Does Season 21 of ‘The Voice’ Start? 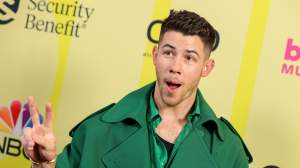 GettyNick Jonas is leaving “The Voice.”

NBC has not yet announced an official release date for “The Voice.” However, based on previous seasons, it will likely kick off towards the end of September.

Grande is taking over Nick Jonas’ chair on “The Voice.”

As reported in a previous Heavy article, it is typical for coaches to “rotate every season or two.”

At this point in time, Shelton has not only been on the show longer than any other coach, but he has won the most seasons. The country singer has coached six champions over the course of the show.

Will Grande rival his title as the most successful coach on “The Voice”?

Discover more from Heavy on The Voice↓

Unlock the latest news, rumors and exclusives from The Voice — direct to your inbox. ↓

More Heavy on The Voice

Loading more stories
wpDiscuz
0
0
Would love your thoughts, please comment.x
()
x
| Reply
Fans are opening up about about what Ariana Grande's first days on 'The Voice' have been like.