When you ponder about the best gaming handhelds out right now, we’re sure the Nintendo 3DS and iOS/Android powered devices come to mind.

What’s sad is the fact that Sony’s successor to the excellent PlayStation Portable doesn’t get as much love from Sony. It’s a powerful device with a sleek design and the ability to output impressive visual fidelity. This may come as a shock to some of you, but the PS Vita was granted a lineup of great games in 2016. We’re talking quality RPG’s, platformers, visual novels and action/adventure romps. We’ve dug through most of the PS Vita’s 2016 games library and arrived with these 10 standout titles for you to enjoy.

If you still own a PS Vita, then these 2016 titles definitely belong on your portable platform (that’s sadly on life support…)

Sasha’s a warrior with one arm. Doesn’t sound like much of a threat, does she? Well that’s where you’re wrong. The loss of her family and her unyielding mission to find them puts her on a warpath with her powerful living sword in hand. The touchscreen-based battle system lets you hack all manner of baddies and sever their body parts off completely. Severed’s interesting art design brings Sasha’s torn world to life beautifully. It features light RPG mechanics, a fun equipment system, an incredible soundtrack and battles/puzzles that will truly challenge you. Make sure you spend plenty of time with Drinkbox Studios’ portable epic on your PS Vita.

Now here’s a game that got the right treatment by getting ported over to the States. This former Japanese exclusive got plenty of loyal fans behind it thanks to the presence of memorable Digimon characters. Digimon Story: Cyber Sleuth makes you a male/female mystery solver who just so happens to wipe out digital threats with an army of powerful monsters. While the battle system is simple in execution, the rest of the game features several quality elements. There’s tons of Digimon to collect, an engrossing storyline that seemingly lasts for ages and addictive party upgrading mechanics. Need a lengthy JRPG for your handy Vita? You can’t go wrong with this Digimon battle simulator. 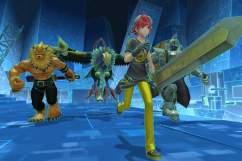 World of Final Fantasy is a playable love letter to Square Enix’s beloved RPG franchise. Fans who’ve stuck around through the many high’s (and recent low’s) of the series will love everything that’s featured here. It introduces two new characters who make use of familiar Final Fantasy heroes, villains, magic and summons within a cool stacking battle system. The Active Time Battle (ATB) system returns, which is nice callback to the RPG series’ golden era. The cutesy, lovable art style of this RPG endears itself well to such a colorful and whimsical take on Final Fantasy’s legacy.

Now here’s a game that makes every choice you make hit you hard when it results in a death. Zero Time Dilemma presents you with a dark adventure that tests your puzzle solving skills to the fullest. The game hits you with a series of situations where it’s up to you to complete “fragments,” which usually leads into cinematic sequences, Escape puzzle sections and the toughest segments of all – moral decision moments. If you managed to trek through the super tough Nine Hours, Nine Persons, Nine Doors and Virtue’s Last Reward, then this title should instantly be familiar to you. Series creator Kotaro Uchikoshi knocked it out of the park again with this one.

Square Enix had a great year. Final Fantasy is back in a respectable place thanks to the aforementioned game on our list and the release of FF XV. Along with those two gaming highlights, the Japanese RPG giant also graced us with Minecraft meets Dragon Quest aka Dragon Quest Builders. What separates this game from its inspiration is the fact that it actually gives you more focused missions to complete. Plus it features all the lovable elements that fans have regarded highly since the Dragon Quest franchise was first introduced. The land of Alefgard can be rebuilt however you please, so take your time and have a ball cutting down Slimes and crafting cute villages.