The new map, titled Shifty Station, will be added into the Splatfest rotation, presumably starting with this upcoming Splatfest. The stage is unique in that it can transform between Splafests.

A new stage, Shifty Station, will be added exclusively to the #Splatoon2 #Splatfest rotation! This stage can transform between Splatfests. pic.twitter.com/GyrcVkuFEC

It isn’t known whether this map will remain a Splatfest exclusive or if it’d come into normal game modes after the Splatfest is over. It’d be shame to see a new map locked behind one day of content. We also know that Splatfest support will inevitably end and we wouldn’t want to see any maps locked behind that either.

One good thing about this map is that it will feel unique every time since it will change depending on the Splatfest. We don’t know how often Splatfests will occur but given we have our second one starting so soon after the first, we’re optimistic that they will appear pretty often.

One of the pictures appears to show Marina’s Octarian icon which means we might be learning a little more about Splatoon’s lore. We know the Octarians are the bad guys in the story mode of Splatoon led by DJ Octavio. It’d certainly be cool to learn more about our Octo-baddies with a new map.

Other updates to hit Splatoon 2 so far gave us a couple guns to play with. The most recent update, just a few days ago, gave us the Dualie Squelchies. The new weapon plays most like the Dual Squelcher from Splatoon 1 and look more like power drills than actual weapons. Before that, we received the Inkbrush in a free update.

Nintendo has promised to keep them Splatfests going for at least two years. This gives us Splatfests for twice as long as its predecessor and it will also be a way to keep players interested. It looks like Nintendo will also be keeping the free DLC rolling as well. 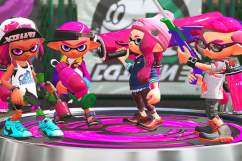 Splatoon 2 1.1.2 Update: Everything You Need to Know