The mobile gaming market features some of the more unsung greats in interactive entertainment.

Besides the every growing glut of free-to-play kingdom builders, match-3 puzzlers and life sims based on celebs, there are quality experiences on iOS/Android devices. Now mind you – while these games are a lot harder to find than a quality console release, roundup lists such as this one make them far more visible. The games compiled for this list offer unique takes on familiar formulas, narrative-based adventures and addictive gameplay. The quality developers behind these mobile experiences deserve accolades for bringing worthwhile gaming to that lil’ device resting in your pocket.

These are the 10 games that represent the best of mobile gaming in 2017.

Traversing a vast galaxy always makes for a fun affair in a video game. When your mission involves fending off dirty politicians and vicious space marauders in said game, that journey becomes more intriguing. Ticket to Earth delivers that experience to mobile devices (and even PC!) in the form of a RPG/puzzler mashup. As you make your way through the awesome plotline, you’ll fend off baddies on colorful tiles. By matching similarly colored tiles, your heroic roster will gain the strength they need to defeat their foes. That portion of Ticket to Earth is responsible for the extremely high fun factor that’ll keep you to the very end. Many props to Robot Circus for creating such a fun mix of the most addictive genres in mobile gaming.

Nintendo finally realized that there’s money to be made in allowing its properties to be adapted into mobile games. Super Mario Run and Animal Crossing: Pocket Camp have proved to be quality releases thus far. But Fire Emblem Heroes managed to surpass both games by replicating the addictive strategy RPG elements that fans regard highly. The chibi-style outlook of active battles may give the game a cute facade, but it’s far from a simple experience. The rock-paper-scissors formatted battle system remains and makes each combat encounter engrossing. Fire Emblem fans have certainly become enamored with the game’s original characters and wealth of fan favorites. Fire Emblem Heroes continues to remain fresh thanks to new characters, events, and a fast-paced battle system that’s perfect for quick playthroughs.

There’s a reason why this trippy puzzler has garnered so much praise. People have flocked to Million Onion Hotel simply because it’s simple yet deeper than it initially appears. Once you begin wrapping your head around the outlandish story, you’ll have mastered the art of clearing out horizontal/vertical/diagonal lines full of veggies and fruits. Once things kick into overdrive mode, pure chaos unfolds in the best way possible. The pixel art is instantly endearing, so you’ll enjoy staring at the wealth of quirky characters and grids filled with onions on your mobile screen. Million Onion Hotel proudly relies on its quirky nature to stay installed on your lil’ device. We’ll be playing this one well into 2018 and beyond.

2014 was the year that gave us one of the most visually alluring mobile puzzlers of all time. 2017 then gifted us with a sequel to that amazing puzzler. Monument Valley 2 presents a new adventure where a mother/daughter duo must traverse a valley full of surreal pathways. The minimalist art design returns along with the soothing music that accompanies you on your journey. Just like the first game, you’ll have to adjust your eyes and understanding of angles as you venture through hidden entrances/exits. Your perspective may change during each puzzle, but your feelings towards Monument Valley 2 will remain positive throughout.

The dark days of bargain bin games being made in association with South Park are behind us. Never mind the terrible N64 FPS and waste of a kart racer. Nowadays, Cartman, Kenny, Kyle, and Stan are being featured in awesome console RPG’s. Oh and let’s not forget worthwhile mobile games such as this one. Phone Destroyer relies on the tried and true formula of battles being decided by the collectible cards in your collection. But since it’s all about South Park, this game’s battles are filled with pure hilarity. Handing out defeat to human and computer controlled foes thanks to the assistance of characters like “Ninjew Kyle” is something only Phone Destroyer could get away with. What you’re getting with Phone Destroyer is a single-player component worth playing, fun PvP encounters and the type of raunchy humor you’d expect from the South Park crew.

It’s good to see how many more games there are with a stronger focus on its narrative. Some of the more unforgiving gamers out here deem such games as “walking simulators,” but they’re more than that. This next pick is proof of that. Old Man’s Journey tracks an elderly individual who hits the road to discover parts of his past and future. The clever mechanic of creating different paths for your older onscreen avatar with finger tapping/rubbing is admirable. The soothing soundtrack, gorgeous visuals, puzzles that never frustrate and eye opening revelations made this game stand out from the pack in 2017. Old Man’s Journey is a simple yet effective exercise in discovering a game’s plotline through a calmer style of gameplay.

A bunch of you guys poured embarrassing hours into Kingdom Rush, right? If you said yes to that question, this next pick should be on your radar or already taking up space on your mobile device’s home screen. Iron Marines is a rambunctious strategy RPG that’s all about interplanetary struggles that feature robots, aliens, and human grunts. The wild action unfolds onscreen in explosive fashion as you send out your army to do dish out destruction. All those missile launchers, flamethrowers, laser rays, hero abilities and more come in handy during the 14-mission campaign, special operation missions and super intimidating Impossible Mode. Iron Marines does everything that Kingdom Rush does in a much more improved (and galaxy exploring) manner.

So here’s a novel concept – combine the coin munching mechanics of two arcade classics and let mobile gamers go nuts. Arkanoid’s all about breaking down blocks by reflecting a ball towards them, while Space Invaders focuses on you clearing out unfriendly UFO’s. Arkanoid vs. Space Invaders challenges you to wipe out those nasty invaders by bouncing their bullets back in their direction. There’s still the presence of blocks in your way, so breaking them apart is still a part of the fun here. As you delve deeper into this arcade game mashup, you’ll come across new abilities, bosses, puzzles, and a bunch of Taito’s lovable characters. This game’s tailor made for a Barcade. Luckily, you can download it and enjoy its arcade madness for free.

Blackjack + medieval RPG action = a good time! Battlejack adopts this equation and succeeds as expected. Amassing a wealth of formidable heroes via cards is just a part of the fun. There’s tough battles to endure of course, but the stakes are raised when you’re looking to reach a score of 21. Doing so gives your heroes a substantial boost, but going over can lead to some unfortunate circumstances. That main gameplay hook is what makes Battlejack’s battles interesting at every turn, especially when it comes time to wipe out Titans with your trusted guild. The wonderfully animated visuals, addictive card collecting, and risk vs. reward based battle system pushes Battlejack to glory! 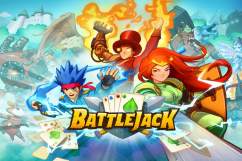 Don’t worry – we’re not gonna assault you with any cat puns on this one. Anyways, Cat Quest has to be one of the cutest action RPG’s ever released across mobile and console platforms. The dreaded Drakoth is responsible for kidnapping the main hero’s sister, which means you’ll need to take your feline warrior onto a massive overworld and save her. The legacy mechanics of action RPG’s are all spoken for here – a big main campaign, tons of side missions, bright and dark locales to explore, plenty of loot to collect, and a slew of baddies to slay! The continent of Felingard is ripe for exploring. Thankfully, Cat Quest gives you enough reasons to do just that. 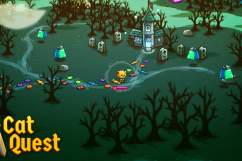 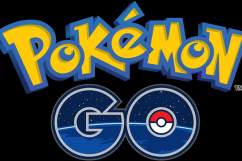