For several years now Dead by Daylight has dominated the landscape when it comes to asymmetrical horror games.

While it’s not the scariest game in the world, Dead by Daylight does have its moments and the main selling point is the sheer number of horror icons in the game.

On top of its original characters like the Wraith, Spirit, and the newly released Trickster, there are also a bunch of familiar faces.

Whether you’re a fan of Saw, Nightmare on Elm Street or Stranger Things, there is something for you here.

Something that doesn’t have a lot of representation is other video games. Last year we saw Silent Hill get its own chapter and now Resident Evil will be following in its footsteps.

So far, all we know about the Resident Evil chapter is that it’ll be arriving in June. This is part of the 25th anniversary of Resident Evil and it’s hard to think of a better game to crossover with.

With no concrete release date, the only thing we have to look forward to in the near future is a livestream on May 25 that will be a more in-depth look at what to expect.

This will also be part of the 5th anniversary of Dead by Daylight, so this will be a milestone for both franchises to celebrate.

What Do We Know About the Chapter? 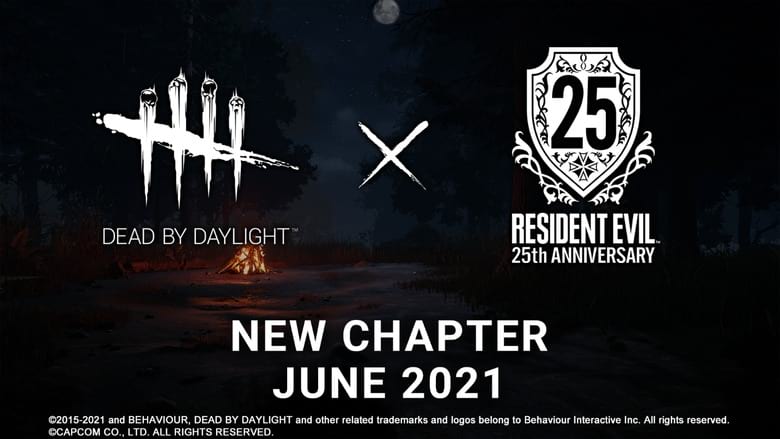 The Umbrella logo will be part of an exclusive charm for this chapter, but there’s not much known about the chapter itself.

We don’t know anything about who the new survivor or killer will be, but there are definitely some guesses we can make.

Chris Redfield or Leon S. Kennedy would make for excellent survivors, and there are even more routes the developers could take if they want.

As for the killer, somebody like Wesker, Tyrant or Mr. X would certainly work. Dead by Daylight features killers of all shapes and sizes, so pretty much any direction the devs go in will work out. What we don’t know is if this will be an effort to promote Resident Evil 8 or if Capcom will be relying on big names like Leon and Chris to sell this chapter.

One thing is very clear and it’s that the developers are very excited to crossover with such a storied franchise.

“This is such an awesome new addition to our universe! If you had told us, five years ago when we launched, that one day we would be adding characters from the legendary Resident Evil world into our game, none of us would have believed you”, explains Mathieu Côté, Game Director for Dead by Daylight. “We are so very grateful to Capcom for everything they’ve done over the years to bring horror to the world of video games. And today, we get to bring these icons into Dead by Daylight. It is an incredibly proud moment for us.”

Whatever the case may be, we’re sure fans will definitely be excited about this chapter. We’ll let you know when more information is available.