It’s that time of year in Fortnite and it’s looking like Chapter 3 is getting off to a very fast start.

In just a matter of days, the same season that’s already given us Spider-Man will also be giving us the start of Winterfest. This news comes from the recently released v19.01 update that gives us weapon tuning and some needed bug fixes.

If you’re a fan of completing quests for a ton of XP while also getting the chance to earn some free cosmetics, then you’re in luck.

Winterfest is getting ready to start back up and it’ll be bringing a variety of holiday skins into the game, and the transformation you’ve already seen will continue to become more festive.

Here’s what we know about Winterfest. 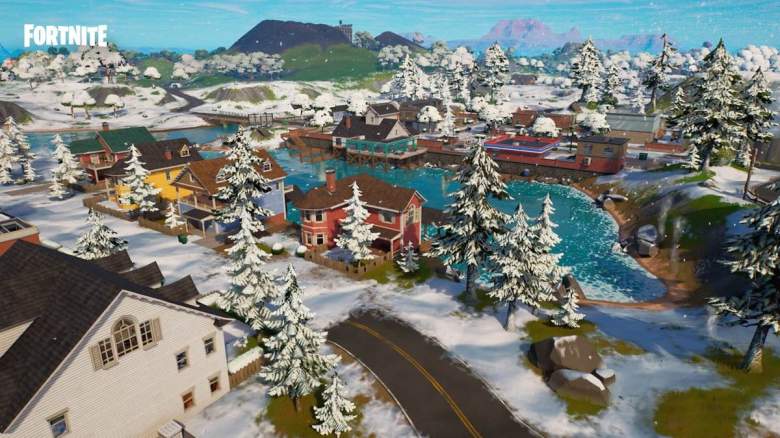 According to a variety of Fortnite leakers, Winterfest kicks off on December 16, so there’s just a few days left before we can jump into the good stuff.

This event is unlike any other in Fortnite because it lets players open up gifts and get some free cosmetics. It’s looking like there will be at least one skin for players free of charge, but who knows what else the future holds?

For some reason, every present in the Cabin is from MJ 😂

(Thanks to @zatheo_ for showing me how to get the Cabin In-Game early) pic.twitter.com/8nXmuZyuZV

Strangely enough, the leaked image of the Winterfest cabin shows a bunch of presents all from MJ, so it’s looking like she’s excited to show us all what she got us.

Of course, MJ is more than likely a reference to Spider-Man’s love interest Mary Jane. There’s no telling if this is how the cabin will launch because it does seem weird to have every gift come from the same person.

Here is the version of Blizzabelle that everyone will be able to get for free: pic.twitter.com/liU9fsaEjN

One of these presents will presumably hold the Blizzabelle skin, which is seem above, so if you log in and open up your presents, you should be able to get it for free. There will be skins that come into the Item Shop as well that you might be interested in, so save your V-Bucks.

Sadly, all good things must come to an end and Winterfest is no exception to that rule. According to ShiinaBR, this holiday event will reach its conclusion on January 6, but that gives us plenty of time to experience everything Epic has to offer.

With all of the cosmetics and quests to complete, players will definitely be busy for the rest of the month and a few days into the new year, so make sure you don’t miss out on the festivities.

There’s a lot of excitement around Fortnite at the moment thanks to the launch of a new Chapter, and this Winterfest event is just icing on the cake. There’s a lot of cool stuff in the game currently, and yes, we’re talking about Spider-Man’s Web Shooters. There hasn’t been an exciting start to a season like this in a while, so we’re just going to relax and bask in the glory of a new chapter.

We’ll have to wait and see if Epic is able to keep the ball rolling all season long.