We’re getting closer to the end of April, which means another Fortnite Crew bundle is just over the horizon and it’s looking to be a big improvement over the last one.

This doesn’t just apply to the skin either, but it’ll also include the bonuses you get. In a surprise move from Epic Games, anybody who is a subscriber will receive permanent access to the Save the World PvE game mode.

Keep in mind that Save the World isn’t available on mobile or Nintendo Switch, so don’t let that influence your purchase if you’re on either of those platforms.

What this means is even if you let you subscription expire, you’ll keep access to Save the World, which gives this Crew membership great value.

On top of that, Epic teases a surprise for Crew subscribers each Thursday in May, so there’s an added incentive for players to be subscribed. Remember, there’s also the Spotify Premium trial that’s included too. It only applies to people who haven’t used Premium before, but it’s still a cool bonus that’s bundled here.

Now that all that’s out of the way, let’s hop into the cosmetics that you’ll be getting in May. 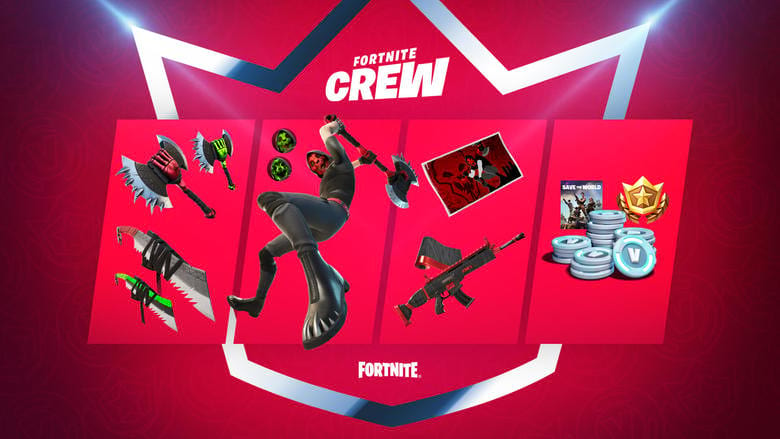 Like previous Crew bundles, the May pack will come with a new skin along with a bunch of cosmetics for players. All of the cosmetics come with a variant style, so you’ll be able to mix things up a bit if you’re not a fan of the black and red style.

This month features Deimos who is actually a Hero from Save the World. Now, a lot of players who play the Battle Royale portion are likely unfamiliar with what’s going on in StW, so this might as well be a new skin entirely to a big portion of the playerbase.

Here’s the full list of things you’ll be getting:

This skin easily looks like one of the better Crew packs we’ve had and it’ll likely be bringing in several new subscribers over previous months.

Of course, having all of the extra goodies and incentives doesn’t hurt either.

Now, the only question that remains is when will players be able to get their hands on the new cosmetics.

The current Crew bundle with Alli will rotate out on April 30 at 8 p.m. ET and it’ll be replaced with this new one.

Remember, you have until that day to grab the Alli skin if you want it. If you wait too long, it’ll disappear forever. Becoming a Crew subscriber in the days before a new pack comes out will get you two bundles for the price of one, so there’s a lot of added value there.

Of course, if you’re not a fan of a particular skin, there’s no harm in skipping a month. We wonder what those surprises are for each Thursday.

Loading more stories
wpDiscuz
0
0
Would love your thoughts, please comment.x
()
x
| Reply
Here's a look at what's in the Fortnite Crew bundle in May.