The next Fortnite Icon Series member has been revealed and it’s a member that you likely never expected.

Minnesota Vikings wide receiver Justin Jefferson becomes the first NFL player to have his own locker bundle and emote. Of course, NFL players playing Fortnite is nothing new as JuJu Smith-Schuster has been a long-time player of the game.

Jefferson will have his Icon Series emote based on his endzone dance, which was created by Allen Davis. If you’re a Vikings fan, you might have seen him bust this “Get Griddy” move a few times over the past season since he scored seven touchdowns.

Typically, an Icon Series member would be getting a skin of their own, but Epic decided to only give the wide receiver an emote, but they did let him pick his own bundle.

Here’s a look at what you need to know.

From the endzone to the Island, @JJettas2 dances his way into the Icon Series with a new Emote and Locker Bundle coming to the Item Shop on April 28.

This new emote will be available on April 28 and since it’s just an emote, like the Bruno Mars Icon Series cosmetic was, this one will be a lot cheaper to pick up than a skin would be. 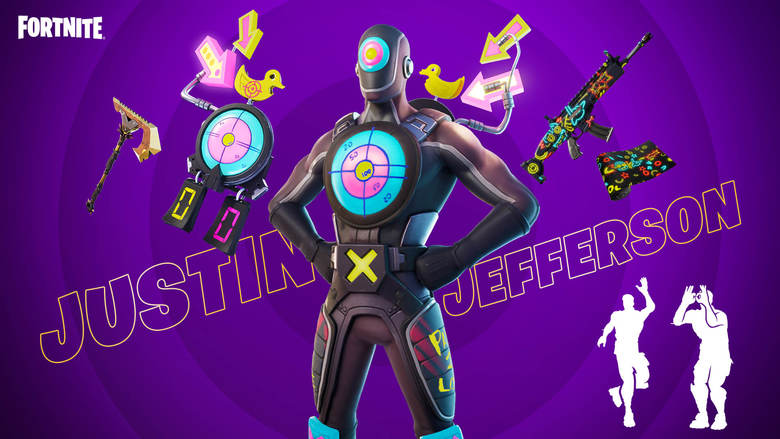 On top of the new Icon Series emote, you’ll get the following cosmetics:

All in all, it’s a pretty solid bundle as these are not cosmetics you see every day, so it’ll be nice to pick it all up at once if you’re interested.

It’ll likely hang around in the Item Shop for a few days once it’s released, but make sure you pick it up if you want because Icon Series cosmetics don’t come back to the shop very often.

Don’t Forget the Other Sports Star

He can be contained no more!

Starting April 27, Battle Pass owners can earn the @neymarjr Outfit and other items from his Set.

Read about what's happening in @FNCreate and compete in the Neymar Jr Cup where you can win a custom-designed soccer boot ⚽https://t.co/pnDCYwkgpk pic.twitter.com/FkiH0Emfdo

This is shaping up to be a big week for sports fans as soccer superstar Neymar Jr. will also be getting a skin in the game.

This one will different than the Jefferson cosmetics as Neymar will only be available for Battle Pass owners. On April 27, following the release of the v16.30 update, a new set of quests will become available that’ll unlock the skin.

On top of this, there will also be a back bling, pickaxe and loading screen up for grabs that can be unlocked by completing challenges.

To summarize, we have Neymar and v16.30 on Tuesday and then we have the Justin Jefferson Icon Series bundle on Wednesday. While that’s enough for many players, we’ll likely be getting some new things to do in the update as well.

As we go into the third big update of Season 6, things are certainly looking up so we’ll just have to hope Epic is able to keep the ball rolling in the coming weeks.

Will you be picking up any of these cosmetics when they become available? They won’t be around forever!

READ NEXT: Every Bug Being Fixed in Fortnite v16.30 Update