We’re nearing the end of January and that means another Fortnite Crew Pack is right over the horizon.

Epic tends to reveal the whole set just before the month ends, but it looks like leakers have gotten that out of the way for us and shown us what skin we’ll be getting. We don’t have a look at the other cosmetics, but the skin is definitely the main attraction of these bundles.

Lately, the offerings have been a bit poor for many players, so Epic is going to need something good to get players back on the right track. If the leaked image is anything to go by, then we might be looking at yet another controversial month as this one might have difficulties winning players over.

Keep in mind that this is just a leak for the time being and we don’t have official confirmation from Epic about whether or not this is indeed the Crew skin.

According to an image posted by ShiinaBR, the leaked Fortnite Crew skin for February will be a golden character wearing some neon clothes. It’s tough to tell exactly what Epic is going for here, but for those of you who were hoping Peacemaker would find a way into Fortnite through the Crew Pack, it will come as a disappointment.

There was a lot of chatter near the end of Chapter 2 about Epic returning to more original skins, but those skins have now been very hit or miss. The reality is that collaborations are some of the coolest skins in all of Fortnite, and judging by the upcoming Marvel skins, it doesn’t look like that’ll stop being the case.

With that said, there’s always room in Fortnite for more originality, so fans won’t want collaborations to completely take over.

We’ll likely find out if this is the next Crew skin in a matter of days, so if you don’t like it then there’s still a chance that you might get a different skin. If you’re interested, you still have time to pick up the current pack.

When Does the Next Pack Come Out? 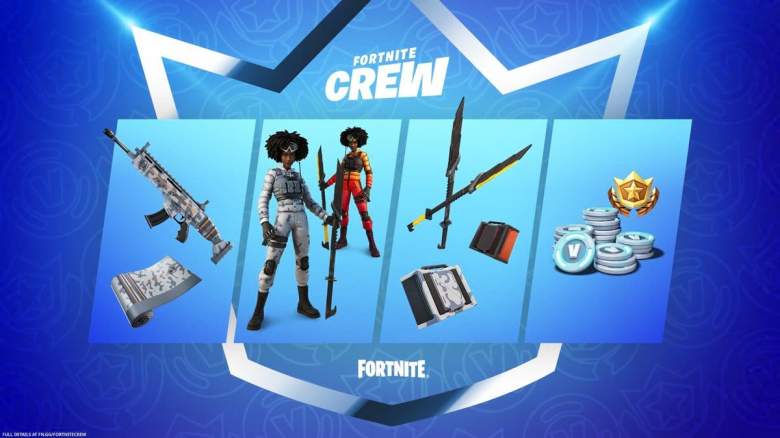 New Crew Packs have typically released on the last day of the month during the Item Shop reset, which means this one will likely release January 31 at 7 p.m. ET.

If you’re a subscriber, you’ll see your locker get updated with the new gear around this time. The Crew subscription also comes with more than just cosmetics. Subscribers also get a monthly allowance of 1,000 V-Bucks and the Battle Pass if they haven’t already purchased it.

It’s a nice deal for players who like the offering, and you’re free to cancel the service at any time. If you do cancel, you’ll still keep all of the skins you purchased, but you will miss out on any future ones you’re not subscribed for. All of the skins given out through the subscription are exclusive, meaning non-subscribers will never be able to get them again.

There haven’t been a ton of “can’t miss” skins that have released, but if you’re somebody who likes to collect all the superheroes, then you might be bummed to know you missed out on Green Arrow.