One of the most popular guns among many players and streamers in Fortnite over the years has been the Flint-Knock Pistol.

The unvaulting of this weapon was cause for celebration when it happened with the v15.40 update, but it looks like Epic had different plans for the gun.

Following a new hotfix that dropped on February 23, the weapon was removed from the game yet again, but in its place came another weapon that players have come to know and love over the years.

We’re not sure where we land, but it’s always nice to get an updated loot pool in Fortnite.

The Hand Cannon is Back 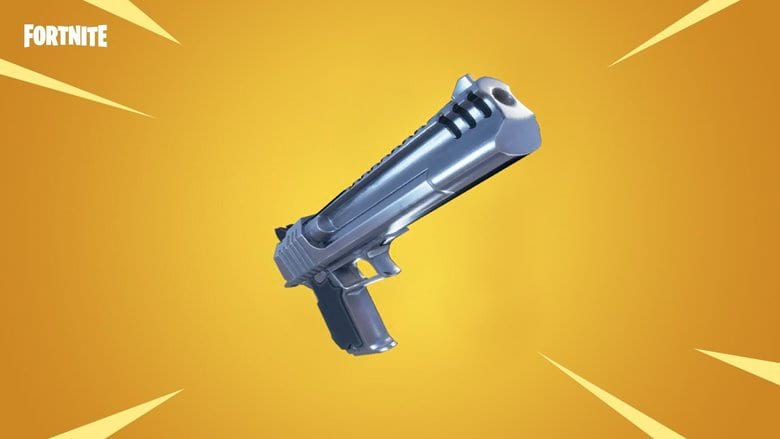 The Hand Cannon, also known as the Deagle in the community, is now part of the loot pool. This means that the next time you load up Fortnite, you should be seeing this weapon as part of the game now and you’ll likely see many players trying to use it.

One of the big draws of this gun is how easily it can dish out tons of damage, but it’s far from being the most accurate weapon in the world. It excels in Duos and Squads, but it might not be the best weapon to use if you’re all by yourself.

This isn’t the only thing that changed with this small hotfix, so let’s go right in and take a look at the rest of the changes.

What Did the Hotfix Change?

A new Hotfix is live!

🔫The Flint-Knock heads back to the vault, but something handy took its place this week.
🔁New LTM later this week: Comeback Squads. Every life your loot gets better, but you have limited respawns! pic.twitter.com/W7DJD1yInf

Although this is just a hotfix that didn’t require any downtime, there are still some interesting things to look at here.

The Comeback Squads starts you off with common loot, but each time you respawn, you’ll have better weapons at your disposal. However, your respawns are capped at five, so you’ll need to make sure you’re not eliminated first!

Outside of this, there doesn’t seem to be anything else that’s noteworthy such as balance changes, new locations, or anything of that nature. That sort of thing is to be expected with small updates like this, but it’s still nice to see smaller patches like this come in between the big ones.

v15.50 will be the last update of this season by the way, and as far as i'm aware a hotfix can't fix the quest data required to fix Week 14 and Week 15 challenges.

According to Fortnite leaker FireMonkey, the upcoming v15.50 update will be the last patch of the season before we shift gears into Season 6.

He says that this update will be needed to fix some of the upcoming challenges as well, so hopefully it gets here sooner rather than later.

There will possibly be several live event files hidden in this update if it’s actually the last one of the season, so that will definitely be something we should keep our eye on. The end of February is fast approaching so let’s hope the season ends on a high note!

READ NEXT: Why Now is the Best Time to Get the Fortnite Crew Pack

The Flint-Knock Pistol is gone, but something else has taken its place in Fortnite.