Now that February is coming to a close, it’s almost time for another Fortnite Crew Pack.

These exclusive bundles give players access to a skin, some cosmetics, and even V-Bucks, all provided they sign up for a month.

The idea behind it is to give players access to a bunch of exclusive cosmetics, so if there’s somebody who has a big fear of missing out, they’ll be forced to subscribe because once the month wraps up, everything is gone.

Another bonus the Crew Pack gives is you can get the Battle Pass with it if you haven’t already bought it. Considering the Battle Pass is 950 V-Bucks on its own, and you get 1,000 just by being a subscriber, we’d say that’s pretty good value.

This is part of the reason now is the absolute best time to hop on the Fortnite Crew wagon if you haven’t been part of it yet.

Why You Should Get the Fortnite Crew Pack 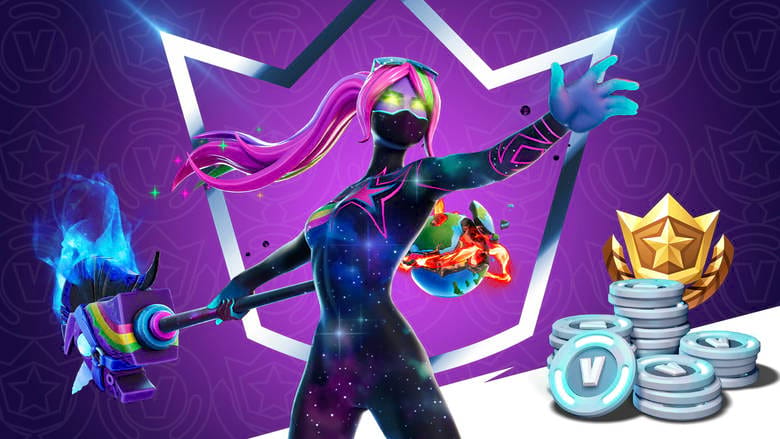 If you’re an avid Fortnite player, chances are good that you already have the Battle Pass, but if you decide to subscribe to the Crew now, you’ll get a great deal.

You’ll be able to grab the Season 5 Battle Pass and also the Season 6 Battle Pass with one subscription. This means $11.99 will get you two Battle Passes, two exclusive cosmetics, and 2,000 V-Bucks.

It’s hard to think of something that has that much value, but it all comes down to subscribing before the March bundle is released.

This gives you access to both February and March, and then you can cancel the subscription before it renews. It feels a bit like cheating the system, but Epic allows you to do this, so if you’re trying to maximize your value, this is absolutely the game plan for you.

You might already know Vi is the main highlight of February’s bundle, but it could also be helpful to learn about everything included in March’s, so let’s take a look!

Fearless, flashy, fashionable and always ready to party up.

Grab the Llambro Outfit along with the rest of the Llegend Set when it arrives exclusively for Fortnite Crew members on March 1.

The March Crew Pack contents were revealed on February 22, giving players a little under a week to decide if they want to keep their subscription or let it lapse before they have to pay again.

In this bundle, you’ll get the following cosmetics:

On top of that, you’ll get 1,000 V-Bucks and the Battle Pass for Season 6 when that rolls around.

When a Battle Pass is available, it’s hard to pass up the bundle because it costs pretty much the same as it would if you’re buying the pass on its own, but you’ll miss out on a skin.

As Fortnite has continued to grow, having a diverse set of skins in your locker has become important because everyone wants to have something that lets them stand apart from the competition.

The fact that Llambro is an exclusive skin will make it that much more rare a year from now when there are new players in the game who didn’t have a chance to get this skin.

If you’re on the fence with the Crew subscription still, you might be able to look forward to more features coming soon to sweeten the deal.

Now is a great time to jump onto the Fortnite Crew Pack bandwagon.