Another retail bundle is coming to Fortnite, but instead of featuring DC Comics characters, this one will feature entirely new takes on some old favorites.

The last physical release was The Last Laugh bundle that brought Poison Ivy, The Joker and Midas Rex into the game, and it’s been chilling in the Item Shop ever since.

It looks like Epic is planning on coming out with a replacement for that bundle in the coming months called the Minty Legends. We don’t know what this means for The Last Laugh bundle as there will likely still be physical copies of that floating around, but it does mean Epic has a new bundle in time for the holidays.

Since this one isn’t a crossover, fans might not know what exactly to expect. Luckily, we have you covered.

What’s in the Minty Legends Pack?

The pack contains 10 items in total according to an Epic Games blog post, so there’s a lot to take in with this purchase.

Of course, the main draw will be the three different skins, and those include fresh takes on Oro, Brite Bomber and Aura. Epic says you’ll be getting those skins, three pickaxes, back blings, and one new wrap. To top it all off, there will be 1,000 V-Bucks included with the bundle.

If you’re a fan of any of these skins, then you might be interested in scooping this up once it releases. With the exception of Oro, these are popular skins you see running around to this day. Maybe this will be the push Oro needs to break into mainstream popularity. 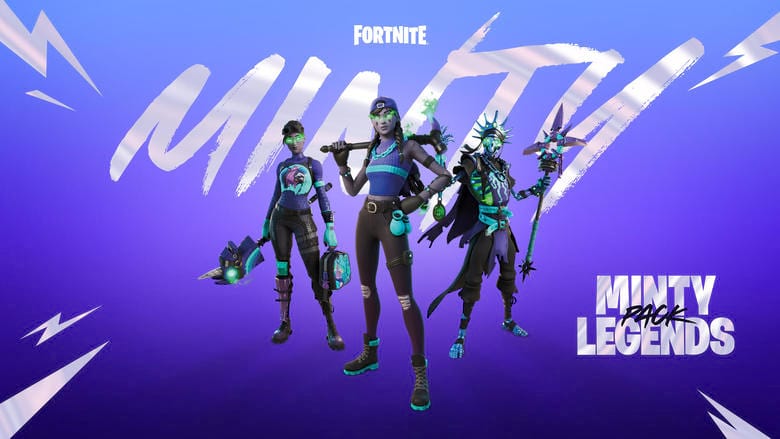 Epic GamesThings are getting minty.

The interesting part about all of this is the fact that the Minty Legends pack doesn’t actually release until November. In case you haven’t seen a calendar in a while, the current month is August, so it’s definitely curious timing for an announcement like this.

With Fortnite still being the juggernaut in the gaming industry that it is, this pack will likely sell quite well in time for the holiday season. It will release physically and digitally on November 2, so it’ll be a while before you are able to get your hands on it.

At least you can look at how cool the skins are before you make the decision to purchase it. Keep in mind that if you do get a physical copy, it’s not going to come with a disc that you can pop into your console. Instead, it’s just a code that you redeem for your account.

This purchase will come with an actual game case though, so you can put it on your shelf and act like you own a physical copy of Fortnite. Nobody will know but you, so if you’re a collector, then feel free to do that. This mostly seems like a way for parents to purchase Fortnite stuff as a gift to kids in a way that isn’t just handing out V-Bucks cards.

For anybody else, the digital copy will do just fine.