Exotic weapons just got a lot more common in the recent Fortnite update as NPCs now sell stacks of them, so you can get all loaded up on them if you have enough Gold.

As you might know by now, the addition of Exotics is a major part of this season and Epic is trying everything they can to encourage you to pick them up. Most of the guns aren’t overpowered by any means, but when you can fill up your whole inventory with them, chaos can ensue.

For example, The Dub shotgun has a knockback ability, similar to how the Flint-Knock Pistol, and getting five of them will let you have 10 shots in total.

Since there’s no delay between shooting The Dub, you can cycle through all five of them and shoot right away. One Fortnite player showed how powerful doing that can be.

This Can’t Be Right

The Power of 5 Exotic Dub from FortNiteBR

If you think back to earlier in the season, you’ll remember that players abused the Zero Point’s healing mechanic and lived in the storm for easy wins.

Although that’s been fixed, it still looks like many players are finding ways to get around that and stay alive on top of the Zero Point.

Reddit user ISNEWPuddy showcased the power of having five of “The Dub” shotguns by blasting high into the air. Since you’re able to buy five of them at a time now, if you have the gold then you can load up on them and do this for yourself.

In the clip, you can see him shooting into the sky indefinitely, which is possible because of the lack of a delay. Although he doesn’t get on top of the Zero Point in the video, he shows it’s possible and you can even get a glimpse at somebody else just dancing on top of it.

It seems that if you want to try this out for yourself, you’ll be able to do just that.

Will This be Fixed? 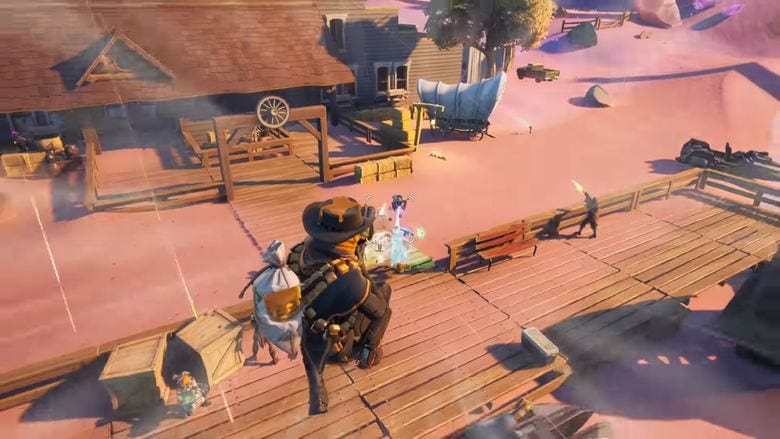 Just looking at this for a second will instantly reveal to you how much of a problem this could turn out to be.

One person could land and buy up the whole inventory of this Exotic shotgun and then jump on top of the Zero Point.

You shouldn’t be able to remain there indefinitely anymore, but you could certainly use this as a strategy to survive until the late game.

Of course, jumping down into the fray with five shotguns in your inventory won’t often lead to a victory, so that’ll be something to keep in mind if you want to try this out.

A simple fix to this would be to create a delay before shooting since that’s how you’re able to get this high into the sky in the first place. Another option would be to just leave it alone because this is highly unlikely to ever become a viable strategy, but who knows for certain.

Maybe give it a try for yourself and let us know how it goes.

Loading more stories
Having 5 Exotic shotguns can be VERY strong in Fortnite.