It’s no secret that Spanish Twitch streamer TheGrefg would be getting the next Fortnite skin as part of the Icon Series, but few could expect him breaking all sorts of records along the way.

In the lead up to him revealing the skin on his stream, the Spanish star was able to cross all sorts of milestones, including the shattering of many Twitch records, with the most notable one being the all-time viewership record.

Before he could even get around to revealing his skin, he crossed over the 1.5 million viewer mark, which is far and away the most we’ve ever seen from an individual creator on Twitch, absolutely crushing the likes of Ninja and Tyler1.

If there was any question as to whether or not Fortnite was actually on the decline in terms of excitement and overall viewership, this stream alone can put all of that to rest. 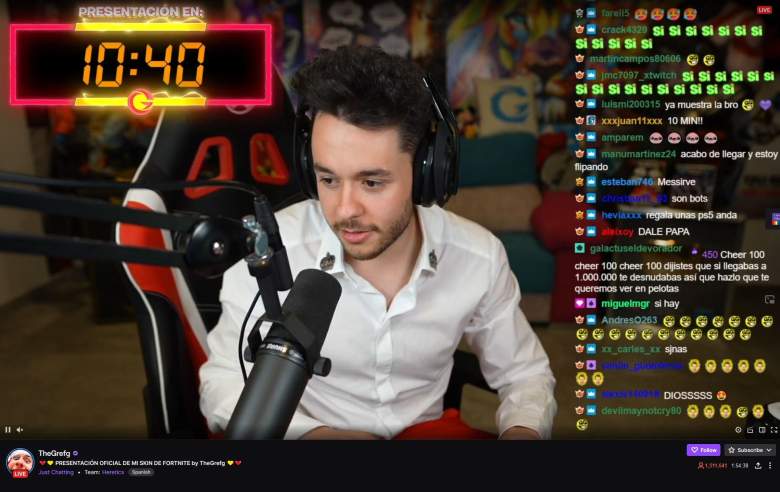 twitch.tv/thegrefgThis is a record for viewership on Twitch.

The Twitch star went live two hours before his skin was set to be unveiled to the public, and it’s clear that fans were extremely excited with what his skin would look like.

He’s not the first streamer to get their own skin in Fortnite as Ninja, Loserfruit and Lachlan have all had their own cosmetics already released, but none of them were able to reach viewership levels like this.

¡Vamos!@TheGrefg now holds the record for most concurrent viewers ever on Twitch. pic.twitter.com/26VceVSJyS

To his credit, TheGrefg has been hyping up the reveal of his skin for several weeks, and he has been confirmed since the launch of the Icon Series, so that by itself can build up all sorts of excitement.

With over 2.4 million viewers watching at its peak, it was very important that the skin reveal wouldn’t let anybody down, so let’s take a look at what his Icon Series skin looks like.

Like all of the creators before him, Epic Games modeled an entire design off the actual appearance of TheGrefg, and this will be reactive, much like the Lachlan one before it.

It will remain in the Fortnite Item Shop for several days after its release, so anybody who is currently running low on V-Bucks but still wants to get their hands on the skin, rest easy knowing you have a while to do so. It will become available January 16.

2.4 million live viewers on his Fortnite skin Debut! Congrats @TheGrefg absolute monster and you deserve it 🙌🏻

After seeing the popularity surrounding this skin in particular, it will be very interesting to see who Epic chooses for their next Icon Series skin. It seems very unlikely that it will ever be able to top the viewership here, but there was no way anybody suspected that insane viewership TheGrefg was able to pull.

There are several Fortnite creators to choose from for potential skins, but if Ninja wasn’t able to pull in a crowd this massive, it’s tough to imagine who else has the potential to do so.

In fact, several of those streamers praised TheGrefg for reaching this massive milestone, including Fortnite World Cup winner Bugha.

congrats to @TheGrefg on his skin release and over 2million active viewers on twitch! 🇪🇸

For now, this seems like it’ll be a record that’ll remained untouched for a very long time.